Visit the places that inspires the soul with sunny hills, artistic masterpieces, and places of deep prayer where the saints lived and worked. 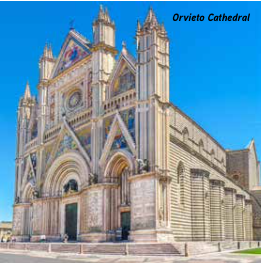 A Truly Catholic Pilgrimage
$5,160
per person

Our pilgrimage begins with our overnight flight to Rome. Meals and drinks served aloft.

Upon arrival at the airport in Rome, we are met by our tour manager who will be with us for the duration of our pilgrimage in Italy. We will begin our pilgrimage by traveling south to Naples, where St. Thomas first attended university, to check into our hotel for dinner and overnight. (D)

This morning we take an excursion to Pompeii to visit the ruined city that was dug out from the ashes rained on it by Vesuvius in 79 A.D. Pray at the shrine of the Virgin of the Rosary of Pompeii, built by Blessed Bartolo Longo who was once a fallen-away Catholic. After his reversion to the faith, he developed a great devotion to Our Lady and took the religious name of Brother Rosario upon becoming a Third Order Dominican. Upon returning to Naples, visit the Cathedral of the Assumption of Mary – also known as the Cathedral of St. Januarius – built in the 14th century, and the Dominican church of San Domenico Maggiore, where St. Thomas lived and taught. See the crucifix from which Jesus spoke to Thomas, saying he had written well of Him. Visit the University of Naples, where St. Thomas Aquinas studied. Return to our hotel for dinner and overnight. (B, D) Mass

Depart Naples this morning and drive to Rome – the Eternal City. Journey north to the Abbey of Montecassino. Montecassino is considered by many to be the birthplace of monasticism in Western Europe. St. Thomas Aquinas studied here, beginning at the age of five. Travel a little further north to Roccasecca, the birthplace of St. Thomas Aquinas, before continuing to Fossanova, and visit the Abbey where St. Thomas died in 1274. Afterwards, proceed to Rome where we, check into our hotel for dinner and overnight. (B, D) Mass

We begin our day in Rome with morning Mass in St. Peter’s Basilica, followed by a tour of St. Peter’s including the Pieta and Adoration Chapel. Then we venture outside the city of Rome to visit the Apostolic Palace of Castel Gandolfo, the summer residence of the pope, and one of Italy’s most scenic lake towns. The pope’s former residence has its own gardens that are also now open to the public. Enjoy a tour of the villa and gardens before returning to Rome later this afternoon, with the balance of the day free to explore and enjoy dinner on your own at one of Rome’s many restaurants. (B) Mass

We begin today in St. Clement Basilica, which houses an original fresco depicting St. Clement celebrating the Holy Sacrifice of the Mass, giving us a picture of Eucharistic worship at the end of the first century or the beginning of the second. We then proceed to the Basilica of St. John Lateran. The founding of the Dominican Order can be traced back to a dream of Pope Innocent III where he saw St. Dominic in a dream holding up the basilica, prompting Innocent to approve the new order. Travel through the heart of ancient Rome to Santa Maria Sopra Minerva, once the headquarters of the Dominican Order. Marvel at the Gothic interior and the New-Gothic restoration. Visit the Pontifical University of St. Thomas Aquinas – also known at The Angelicum. Afterwards, spend some time on your own wandering other historical and tourist sites in the area including the Pantheon, Piazza Navona, Spanish Steps, and the Trevi Fountain, and enjoy another night out for dinner on your own. (B) Mass

Early this morning we journey to Santa Sabina on Aventine Hill, the mother church of the Dominican order and the site where St. Thomas began writing his Summa Theologica. We then travel outside Rome to Orvieto, a walled town high on a hill that holds one of the greatest Eucharistic Miracles in its cathedral. In nearby Bolsena, in the 13th century, a priest doubted the Eucharistic Presence during Mass and the host turned to real flesh and the wine to real blood during the consecration. The priest brought the blood-stained Corporal to Pope Urban in Orvieto, and it is now kept in a special reliquary for the faithful to view. It was also in Orvieto where Pope Urban IV called for a world-wide Feast of Corpus Christi and commissioned St. Thomas Aquinas to compose the Mass for this feast, featuring the great hymn “Pange Lingua Gloriosi.” The desk he used while teaching in Orvieto is housed in the church of San Domenico, originally built in 1233 and one of the first churches of the Dominican order. After visiting this church, we return to Rome for our final evening in Rome. (B, D) Mass

Depart this morning for Paris, setting of much of St. Thomas’s teaching career. It was here where Thomas met Albertus Magnus, who later appointed him as an apprentice professor and Master of Students in Cologne. Visit the University of Paris, where Thomas was regent, marvel at the Arc de Triomphe, and stroll along the Champs-Élysées before checking into our hotel for dinner and overnight. (B, D) Mass

Today we begin at Notre Dame Cathedral, still recovering from a massive fire that toppled the iconic wooden spire. Just a few blocks away on the same little island in the Seine we will visit Sainte-Chapelle, built in 1248 to house the Crown of Thorns, and which boasts one of the world’s most captivating array of stained-glass windows. Proceed to St. Severin in the Latin Quarter of the city, St. Jacques, the Saulchoir Library and the nearby Leonine Commission. Proceed to the Louvre for an outside visit to discuss the history of this former royal palace and the importance of St. Louis IX and St. Thomas’ visits there. Afterwards, you have the opportunity to explore Paris for dinner on your own this evening. (B) Mass

We begin our morning with Mass at the Convent of the Annunciation. We’ll then spend time this morning exploring this beautiful neighborhood. Afterwards, transfer to the train station where we board a high-speed train to Toulouse. Upon arrival, check into our hotel for dinner and overnight. (B, D) Mass

Toulouse boasts the first house of the Dominican Order as well as the first church built by the Dominicans, the Eglise des Jacobins. Inside this church, we will venerate the tomb of St. Thomas Aquinas. Nearby, we will pray in the chapel that was once the dormitory where St. Dominic and the early friars lived. We will visit the home of Pierre Seilhan as well as the Church of St. Sernin. Wander the streets of nearby Prouille, before returning to Toulouse by way of Fanjeaux. This hilltop village is home to the first community of Dominican women, founded by St. Dominic, and also where Dominic debated the Cathars. Later this evening we will enjoy our farewell dinner together. (B, D) Mass

Our time pondering the life and faith of St. Thomas Aquinas comes to a close. We transfer to the airport for our return flight home cherishing all the wonderful memories and graces of this pilgrimage. 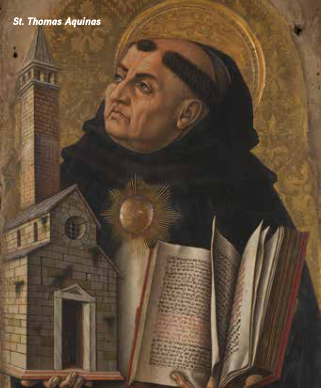