Our pilgrimage begins as we depart on our overnight flight to Dublin. Meals and refreshments will be served aloft.

Upon arrival in Dublin we will be met by our local Irish tour manager, who will remain with us for the duration of our pilgrimage. Depending upon our flight arrival time, we proceed into Dublin proper, the vibrant capital of Ireland, for a tour of this romantic, Old-World European city. Beginning at the church of Our Lady of Lourdes, we venerate the tomb of Venerable Matt Talbot, 20th century commoner known for overcoming his alcoholism through the power of faith, then continue to St. Mary’s Pro Cathedral – the Catholic Cathedral of Dublin. Visit Trinity College to see the famous Book of Kells, the 9th century illuminated manuscript of the four Gospels and end our day by visiting the Whitefriar Street Carmelite Church where we will venerate the relics of St. Valentine the Martyr at his shrine contained within the church, as well as the statue known as Our Lady of Dublin, the best loved statue in the city. Proceed to our hotel for check-in, dinner, and overnight.

Depart Dublin this morning for the early Christian monastery of Clonmacnoise, founded by St. Ciaran on the banks of the River Shannon. Here we have the opportunity to explore the ruins, including the cathedral, two round towers, and numerous churches. We can take time to examine the various crosses and medieval writings, along with the largest collection of Early Christian grave slabs in Western Europe, before continuing to Knock for our overnight.

This morning we celebrate Mass and First Saturday Devotions in the magnificent Basilica next to the original church where our Blessed Mother appeared in 1879 and where Pope John Paul II announced that the Church would be known as the Basilica of Our Lady, Queen of Ireland. Depart Knock and proceed to Kylemore Abbey, the only remaining home of Benedictine nuns in Ireland. Depending upon availability, we will visit and have tea with the nuns here. Venture through Connemara, an area of outstanding scenic grandeur, on our way to Galway. There is a brooding sense of Ireland’s ancient culture and traditions in this haunted and mystical area where Gaelic is still the everyday language. Afterwards, check into our hotel in Galway, known as the “City of the Tribes,” with the remainder of the day free to explore this charming city.

This morning we drive to Rossaveal where we will board a ferry for a trip to the largest of the Aran Islands, Inishmore. With forts, early Christian Churches, villages, cliffs and caves, this island tilts up to the precipitous heights and prehistoric settlement at Dun Aengus, which hangs 100m above the sea. After exploring Inishmore we will return by ferry to Rossaveal and then return to Galway, where we will visit the cathedral dedicated to Our Lady and St. Nicholas and the Collegiate Church of St. Nicholas with its famous Spanish Arch from where Columbus prayed before sailing to the Americas.

Travel via the lunar landscape of The Burren to the magnificent Cliffs of Moher, a dramatic great sheer rock face rising 700 feet from the Atlantic Ocean. Continue to Ardfert to view the remains of the cathedral once dedicated to St. Brendan. Various aspects of the ruins date as far back as the 12th century, though the orifican monastery founded by St. Brendan stood here as early as the 6th century. Proceed to Tralee and the Church of St. John, famed for its numerous stained-glass windows depicting scriptural and sacramental scenes. Finally, journey to Killarney, where, time permitting, this evening you may explore the interesting craft shops, quaint historic buildings and churches, or perhaps sample the traditional form of local transport, the jaunting car (a horse drawn wagon).

Today we travel the road that winds around the beautiful Iveragh Peninsula, better known as “The Ring of Kerry.” It is undoubtedly one of the most magical places in all Ireland. Here bogs, mountains, valleys, lakes and sea blend into a landscape that is often breathtaking beyond words. Even the names of the towns seem to whisper their beauty: Killorglin, Glenbeigh, Cahersiveen, and Sneem. Stops along this route may include the Daniel O’Connell Memorial Church in Cahersiveen and Holy Cross Church in Kenmare. In addition, we will enjoy views of abbey ruins, island monasteries, cliffs, and the sea from our motorcoach. We return once more to Killarney for the night.

Begin this morning at St. Mary’s Cathedral in Killarney. As we depart this region, we pay visits to Muckross House and Abbey. Proceed to Cork, where we will visit the Church of Sts. Peter and Paul, and the Cathedral of Saint Mary and Saint Anne. Continue to our hotel for check-in and overnight.

Journey to the Rock of Cashel, a monumental 12th century complex dominating the surrounding landscape. Tradition holds that it was here where Patrick first used the shamrock as an image of the Trinity and converted the pagan King of Munster. It hosts one of the most remarkable collections of Celtic art and medieval architecture in the region. After exploring this unique and historic location, we proceed to Wexford, and the Irish National Heritage Park, an open-air museum that brings to life over 9000 years of Irish history.

We begin this morning with a visit to Our Lady’s Island, a tiny island at the juncture of the Atlantic Ocean and Irish Sea, surrounded by a salt lake and cut off from the sea by a sand bar. It has been a place of pilgrimage since pre-Christian times, and St. Abban founded the original Christian settlement here, evangelizing the area and dedicating the island to the Virgin Mary, thus establishing the first Marian shine in Ireland. Afterwards, depart for Glendalough, tucked away in the Wicklow Mountains, and established by St. Kevin in the 6th century. Seeking a place where he could commune with God without the distractions of worldly life, the young Kevin lived first in a tree, then in a cave, eventually attracting a following of those who wanted to pursue a similar monastic vocation. Explore the ruins of this ancient monastery and marvel at the faithful asceticism of the medieval monks. We then return to Dublin, and check into our hotel, our home for the next two nights.

Following breakfast, depart for Saint Brigid’s Shrine and Well at the Hill of Faughart where this patron saint of Ireland was born and raised, includes ancient high cross and monastic settlement and St. Brigid’s Stone, a penitential station, beside a holy well. Drive south to see the Celtic crosses in the historic ruins of Monasterboice, the remains of an early Christian monastic settlement. The three high crosses were constructed as early as the 10th century and other remaining ruins are from the 13th and 14th centuries. Later this afternoon visit St Peter’s Church in Drogheda, famous for its tall west gable, rose window, and for containing the national shrine of St. Oliver Plunkett, the last Roman Catholic to be martyred in England. Return to Dublin for our farewell dinner at a local pub featuring traditional Irish music. 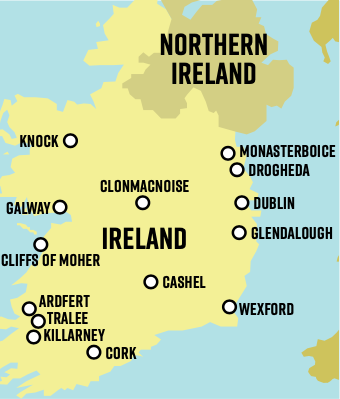