Upon arrival in Dublin, we will be met by our local Irish tour manager, who will remain with us for the duration of our pilgrimage. We journey west to the small village of Knock, where on August 21, 1879, witnesses saw three figures on the wall of a church standing raised about two feet off the ground. The central figure, Our Lady, had hands raised to shoulder height and eyes turned heavenward, as if in prayer. With her were St. Joseph and St. John, Apostle and Evangelist. In 1979, one hundred years after the Apparition, Pope John Paul II paid a visit and bestowed the status of Basilica to the Shrine Church of Knock. We have the opportunity to celebrate Mass, recite the rosary, and make the Way of the Cross. Eucharistic devotions and the Sacrament of Reconciliation are also available to conclude this spiritual, peaceful day at the Shrine. We will visit the Museum of Knock and can browse in the bookstore. Dinner will be served in our hotel. (B, D)

Today we journey west to Ballintubber Abbey, where we will be given a tour of this beautiful historic site, formerly a stopping place for pilgrims on their way to climb Croagh Patrick Mountain. When St. Patrick brought Christianity to Ireland in 44, he founded a church at Ballintubber. The present Abbey was built in 1216 by King Cathal O’Connor. It is the only church in Ireland still in daily use that was founded by an Irish king, and, despite years of continuous attacks and religious repression, it retains an air of ancient beauty and spirituality. After lunch, continue to Croagh Patrick, where St. Patrick once spent forty days and nights in prayer. For centuries pilgrims have come here in imitation of St. Patrick, who often in his lifetime went up this mountain as a secluded setting for his meditation and prayer. We, too, can ascend part or all the way up this 2503-foot mountain. Return to Knock. (B, D, Mass)

This morning we depart Knock and proceed to Kylemore Abbey, the only remaining home of Benedictine nuns in Ireland. Depending upon availability, we will visit and have tea with the nuns here. Venture through Connemara, an area of outstanding scenic grandeur, on our way to Galway. There is a brooding sense of Ireland’s ancient culture and traditions in this haunted and mystical area where Gaelic is still the everyday language. Afterwards, check into our hotel in Galway, known as the “City of the Tribes,” with the remainder of the day free to explore this charming city. (B, D, Mass)

Following breakfast, visit the Galway Cathedral dedicated to Our Lady and St. Nicholas, and the Collegiate Church of St. Nicholas with its famous Spanish Arch from where Columbus prayed before sailing for America. We then travel across the Burren – a vast, bare, eerie limestone plateau – along the coastal road, where we see huge boulders deposited at the end of the Ice Age. On our stop at Burren Display Center, we can get a full idea of the origins of the topography of this region before proceeding to the magnificent Cliffs of Moher, a dramatic great sheer rock face rising 700 feet from the Atlantic Ocean. Spend some time here marveling at the grandeur of the cliffs before returning to Galway, where we will enjoy a traditional Irish dinner at a local restaurant. (B, D, Mass)

Depart Galway and journey south to Bunratty Folk Park. Here we learn about centuries of Irish Heritage and culture. Continue to Adare, regarded as Ireland’s prettiest and most picturesque village. We can look at the two groups of world-famous thatched cottages that line part of the village’s broad main street. Adare dates back at least to the early 13th century. Its strategic location has made it the subject of many conquests, wars, and rebellions. After lunch, proceed to Tralee and the Church of St. John, famed for its numerous stained-glass windows depicting scriptural and sacramental scenes. Finally, journey to Killarney, where, time permitting, this evening you may explore the interesting craft shops, quaint historic buildings and churches, or perhaps sample the traditional form of local transport, the jaunting car (a horse drawn wagon). (B, D, Mass)

Today we travel the road that winds around the beautiful Iveragh Peninsula, better known as “The Ring of Kerry.” It is undoubtedly one of the most magical places in all Ireland. Here bogs, mountains, valleys, lakes and sea blend into a landscape that is often breathtaking beyond words. Even the names of the towns seem to whisper their beauty: Killorglin, Glenbeigh, Cahersiveen, and Sneem. Stops along this route may include the Daniel O’Connell Memorial Church in Cahersiveen and Holy Cross Church in Kenmare. In addition, we will enjoy views of abbey ruins, island monasteries, cliffs, and the sea from our motorcoach. Visit Muckross House and Abbey before returning to Killarney for the night. (B, D, Mass)

Depart Killarney this morning for Blarney, where we will visit Blarney Castle, dating back to 1446. We will climb the battlements to reach the Blarney Stone, said to impart the gift of eloquence to all that kiss it. After some shopping time in the Blarney Woollen Mills, proceed to Cork, where we enjoy a city tour including visits to St. Finbarr’s Cathedral, the Quays, Parliament Bridge, and St. Anne’s Shandon Church. Dinner and overnight in our hotel in Cork. (B, D, Mass)

Journey this morning to the Rock of Cashel – the site of the conversion of the King of Munster by St. Patrick in the 5th century. Then travel north to Glendalough. Tucked away in the Wicklow Mountains, Glendalough was established by St. Kevin in the 6th century. This most romantic of monastic sites was one of Ireland’s greatest pilgrimage centers up to the middle of the 19th century. Continue to Dublin where we will check in to our hotel for our final dinner and overnight of our pilgrimage. (B, D, Mass)

This morning, after Mass, enjoy a brief tour of this charming Old-World capital, including a visit to see the Book of Kells. Then, our pilgrimage comes to an end as we proceed to Dublin airport to catch our return flight home to the US, taking with us all of the blessings and graces of this pilgrimage. (B, Mass) 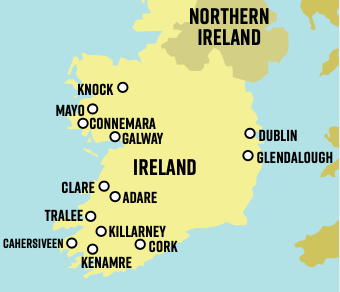