Follow in the footsteps of St. Paul as you embark on a pilgrimage through early Christianity. See the place where the first Europeans were baptized, delve into the book of Revelation at the seven churches of Asia, and come to a deeper understanding of the power of the Gospel and the enduring faith the early missionaries left behind.

A Truly Catholic Pilgrimage
$4,480
per person

Our spiritual pilgrimage begins as we depart on our transatlantic flight to Athens. Meals and refreshments will be served aloft.

Upon arrival in Athens, we will be greeted by our guide and transferred to our hotel with the remainder of the day free for personal activities. (D)

Depart Athens and drive north to Delphi, the center of the ancient world. We will take a walking tour of the Sanctuary of Apollo and the Temple of Apollo, which served as the home of the Oracle of Delphi. Then proceed to Meteora, where we will experience one of the most unusual and spectacular highlights of the pilgrimage as we visit a number of world-famous Byzantine monasteries perched precariously atop the summits of gray rock pinnacles of varied sizes and shapes. Originally Greek Orthodox monks fled to caves in the vicinity for protection and solitude. We will ascend to these sacred retreats via cable car, but you can only imagine how hundreds of years ago monks were ascending on foot! The panoramic view is breathtaking, and their spiritual artwork is splendid. Our final place for prayer today will be the Kalambaka Cathedral – Church of the Dormition – for vespers with the community. Following vespers, we will check into our local hotel for dinner and overnight. (B, D)

Today we will depart Kalambaka and proceed through the ancient city of Pella, the birthplace of Alexander the Great, to Veria (known in Biblical times as Berea) where St. Paul fled after he was threatened in Thessalonica. We will celebrate Mass at the Bema of the Apostle Paul, from which he preached to the local Christians. After Mass, we will see the small Byzantine Basilica of the Resurrection of Christ and one of the town’s most notable monuments, the 14th century Agios Vlasios, dedicated to St. Blaise. Finally, we proceed to Thessaloniki which St. Paul visited on his second missionary journey in 49 A.D. and where he founded a church. These Christians were the Thessalonians, to whom Paul later wrote two letters. Visit the old city ramparts, the Archaeological Museum, and St. George’s Church – an ancient Roman monument that was transferred into a church. Then see the two most beautiful basilicas in the city, St. Demetrius, dedicated to a distinguished member of the Roman army and a martyred Christian convert, and St. Sophia. Overnight in Thessaloniki. (B, D)

Today we will travel to Philippi, the place where St. Paul began his missionary work in Europe. The highlight of the day will be an outdoor celebration of Mass alongside the river where Paul preached and baptized Lydia, his first European convert. We will visit the nearby Greek Orthodox church and then conduct a prayer service at the place where St. Paul was held in prison. While in Philippi, we will also visit the ruins of a basilica, the Forum, the Agora (marketplace), aqueduct, Acropolis, and theater. Next, we will travel along the Via Egnatia to biblical Neapolis, later renamed Christopoulos because it was the first European city to accept Christianity and is known today as Kavala. It is a beautiful modern seaport town and the place where St. Paul landed in Greece after his voyage from Troas. After visiting the Greek Orthodox Cathedral of St. Paul and St. Nicholas Church we check into our hotel in Kavala for dinner and overnight. (B, D)

Early this morning we will depart from Kavala and drive to the Greek-Turkish border to cross into Asian Turkey across the Strait of the Dardanelles to Canakkale. Proceed to Pergamum, the most favored of the Seven Churches where Christianity was introduced very early. Here we will see the Temple of Zeus, the Temple of Athena, the fabled Acropolis and the Royal Gate. We will also visit the Asclepion, one the foremost healing centers of the ancient world. On to Thyatira, another of the Seven Churches addressed in the Book of Revelation. Continue on to Izmir for overnight. (B, D)

Following breakfast, we will visit the Church of St. Polycarp, the oldest church in ancient Smyrna, where we will celebrate Mass. Polycarp, the fourth Bishop of Smyrna, is known as one of the first Christian martyrs. Then drive to Sardis, the Lydian capital city where money was first minted, to visit the marble road of the Roman Gymnasium and the remains of the Artemis Temple which symbolized one of the Seven Churches. Proceed to Kusadasi to check-in to our hotel. The rest of the afternoon will be free to explore this colorful port town with its Mediterranean beaches and Grand Bazaar. (B, D)

This morning we travel to nearby Ephesus where St. Paul spent two years during his ministry. It was to this community that St. Paul wrote his Epistle to the Ephesians. St. Paul implored the Ephesians to cease their worship of Artemis and to turn to Christianity. We will see the great theater where Paul addressed the crowds and visit the site of the scene of the riot from which Paul escaped. Visit the Temple of Diana which is one of the Seven Wonders of the Ancient World, the Church of the Virgin Mary, and the Tomb of St. Luke. Then visit the Basilica of St. John, which was erected over his grave in the 6th century A.D. by the Emperor Justinian. We will then return to our hotel in Kusadasi for overnight. (B, D)

Transfer to the pier at Kusadasi to embark on a three-day cruise of the beautiful Greek Isles. This afternoon we will arrive at the island of Patmos, where St. John received the mystical Revelation which forms the last book of the New Testament. Upon arrival we will take a shore excursion to the Grotto of Revelation and the 11th century Monastery of St. John which houses the original script of the Gospel. (B, D)

Sail into the harbor of the great island of Rhodes, the legendary home of the Greek Sun God Apollo. This island was the site of rich and powerful cities as early as 1100 BC and it was the stronghold of the Knights of St. John who built their remarkable medieval ramparts and castles in the 13th and 14th centuries. St. Paul also set sail from here on his way to Ephesus. Visit the island on your own or join one of the optional shore excursions offered by the cruise line. (B, D)

This morning we arrive to the port of Heraklion on the island of Crete, the southernmost of the Greek Isles and the legendary birthplace of the Greek god Zeus. Heraklion, the capital of Crete and its principal commercial port, is just three miles away from the fantastic ruins of the Palace of Knossos. Discovered in 1899 by Sir Arthur Evans and partially reconstructed, the elaborate Palace is believed to be the mythical Labyrinth of King Minos and the seat of ancient Minoan culture. The Archaeological Museum in Heraklion displays many of the treasures found during the excavations. You may wish to visit the island on your own or take an optional excursion. After visiting Crete, we will set sail and arrive on the island of Santorini, one of the most beautiful islands on the Mediterranean. You’ll have your choice of several optional excursions, but Santorini is easily done on your own. Take time to explore this gorgeous island and stroll through its quaint winding streets and whitewashed alleys and enjoy the local flavor of its many cafes and tavernas. (B, D)

After an early morning disembarkation at Piraeus we will be met at the pier by our local guide and drive into Athens. Explore Ancient Greece with visits to the Acropolis, the Parthenon, and the Ecrectheum. In the Acts of the Apostles, chapter 17, St. Paul began his mission in Athens, gaining a handful of followers for Christ and thus planting the seeds of the faith in Greece. Drive around the city of Athens to see the House of Parliament, the Tomb of the Unknown Soldier, and the Presidential Palace. In the afternoon drive along the scenic coastal road and follow fairly the same route that the Apostle took to the ancient city of Corinth where he preached and lived for nearly two years. Visit the Archaeological Museum, the Market Place, the Bema and the Temples. We’ll celebrate Mass in Corinth before returning to our hotel. The remainder of the day is free for personal activities and exploring Athens on your own until our farewell dinner this evening. (B, D)

Transfer to Athens airport for departure. We will arrive home with images and appreciation of the ministry of St. Paul, Classical Turkey and Greece. (B) 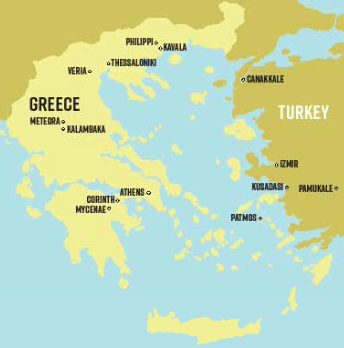 Contact Tekton Ministries to reserve your spot on this life-changing pilgrimage
"I think that passages of Scripture will be much more meaningful to me, of course. Even this morning, going back to the Book of Revelation...I knew exactly what John was talking about."
- John F., pilgrim from Memphis
"The depth of knowledge gained by witnessing the development of our Catholic Faith through actual contact with the Acts of the Apostles locations and the Saints quest to spread the word of God will allow me to live out my faith differently now."
- Gerald T., pilgrim from Memphis
"The tour guides did a super job, were very personable and patient, had a great education which they shared well and also had a sense of humor."
- Fr. Matthew V., pilgrim from Weston, NE