Pilgrimage in the Footsteps of St. Paul – Greece and Turkey 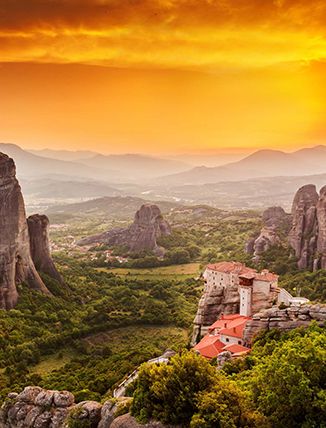 Our spiritual pilgrimage begins as we depart on our transatlantic flight to Athens to follow in the footsteps of the first great missionary disciple, St. Paul. Meals and refreshments will be served aloft.

After our morning arrival into Athens, our journey begins as St. Paul’s journey often began; by diving into the secular world. While the remainder of our pilgrimage will be devoted to sacred sites of Christianity, we would be remised to not visit the Acropolis, the Parthenon, and the Ecrectheum. In Acts of the Apostles, chapter 17, St. Paul began his mission in Athens, gaining a handful of followers for Christ and thus planting the seeds of the faith in Greece. We will take time for prayer at Holy Apostles Church (which dates back to the 10th century) and the Mitropoli (Cathedral), the seat of the Archbishop and hub of the Greek Orthodox Church. Transfer to our hotel for check-in and dinner.

Depart Athens and drive north to Delphi, the center of the ancient world. We will take a walking tour of the Sanctuary of Apollo and the Temple of Apollo which served as the home of the Oracle of Delphi. Then proceed to Meteora where we will experience one of the most unusual and spectacular highlights of the pilgrimage as we visit a number of world-famous Byzantine monasteries perched precariously atop the summits of gray rock pinnacles of varied sizes and shapes. The panoramic view is breathtaking. Originally Greek Orthodox monks fled to caves in the vicinity for protection and solitude, and to gain greater security, went even higher. Their spiritual artwork is splendid. While in Meteora, Fr. Bramlage will lead a lengthy retreat time focusing on the scriptures of St. Paul. After visiting Meteora we will continue on to Kalambaka, where our final place for prayer today will be the Kalambaka Cathedral, Church of the Dormition, for vespers with the community.

Today we will depart Kalambaka and proceed through the ancient city of Pella, the birthplace of Alexander the Great, to Veria where St. Paul fled after he was threatened in Thessalonica. We will celebrate Mass at the “Dais of the Apostle Paul,” and then visit the Bema, the monument to the Apostle Paul; the small Byzantine basilica of the Resurrection of Christ; and one of the town’s most notable monuments, Hagios Vlasios, which is dedicated to St. Blaise. We will then proceed to Thessaloniki which St. Paul visited on his second missionary journey in 49 A.D. and where he founded a church, was heavily persecuted, and wrote two letters to the residents. Overnight in Thessaloniki.

Today we will travel to Philippi, the place where St. Paul began his missionary work in Europe. The highlight of the day will be an outdoor celebration of Mass alongside the river where Paul preached and baptized Lydia, his first European convert. We will also conduct a prayer service at the place where St. Paul was held in prison. While in Philippi, we will visit the ruins of a basilica, the Forum, the Agora or marketplace, aqueduct, Acropolis, and theater. During the day, Fr. Bramlage will lead an extended time of prayer and reflection in this peaceful setting. Next, we will travel along the Via Egnatia to biblical Neapolis, later renamed Christopoulos because it was the first European city to accept Christianity, which today is known as Kavala. It is a beautiful modern seaport town and the place where St. Paul landed with his disciples, Timothy & Silas. St. Luke, the Evangelist, also came here from Troas. We will have time for prayer at the Orthodox Cathedral of St. Paul and St. Nicholas Church before checking into our hotel for our overnight.

Today we leave Greece behind and cross the border into Turkey taking a ferry across Straits of the Dardanelles to Canakkale. Overnight in Canakkale.

Depart Canakkale and drive to visit Pergamum, the most favored of the Seven Churches of Revelation where Christianity was introduced very early. Here we will see the Temple of Zeus, the Temple of Athena, the fabled Acropolis and the Royal Gate. We will also visit Asclepion, one the foremost healing centers of the ancient world. Continue on to Thyatira, another of the Seven Churches. Then visit the Church of St. Polycarp, which is the oldest church in ancient Smyrna and is dedicated to one of the first Christian martyrs. Proceed to Izmir for overnight.

Following breakfast, drive to Sardis, the Lydian capital city where money was first minted, to visit the Roman Gymnasium and the remains of the Artemis Temple which symbolized one of the Seven Churches. We will then stop at Philadelphia which was referred to as the “New Jerusalem”. Proceed to the spa city of Pamukale where we will see the cascading water from the cliffs forming crystallized, dazzling white “frozen waterfalls”. Visit the ruins of the Roman health spa of Hierapolis and see the magnificently preserved Necropolis, the Main Street and Gates. Overnight in Pamukale.

Depart Pamukale and drive to Laodicea, one of the Seven Churches where Christians were chastised by John for being lukewarm. Then proceed to Ephesus to visit the site of the Temple of Artemis which is one of the Seven Wonders of the World. Paul spent two years in Ephesus, and it was to this community that he wrote his Epistle to the Ephesians. Paul implored the Ephesians to cease their worship of Artemis and to turn to Christianity. We will see the great theater where Paul addressed the crowds and visit the site of the scene of the riot from which Paul escaped. Visit the Church of the Virgin Mary, the House of Mary, and the Tomb of St. Luke. While driving to the colorful port of Kusadasi, we will visit the Basilica of St. John, which was erected over his grave in the 6th century A.D. by the Emperor Justinian.

Transfer to the pier at Kusadasi and take a ferry to the island of Patmos where St. John received the mystical Revelation which forms the last book of the New Testament. Once we reach the island, we will take an excursion to the Grotto of Revelation and the 11th century Monastery of St. John which houses the original script of the Gospel. We will then board an overnight ferry for Piraeus.

This morning we will disembark from our overnight ferry in Piraeus and then drive to ancient Corinth, the city that inspired many of St. Paul’s most familiar letters. See the Archaeological Museum, the Market Place, the Bema, and the Temples. Standing in the midst of the ruins of the church of Corinth and seeing the pillars, steps, and public worship-place where Paul preached will enhance our understanding and love of I & II Corinthians. We’ll celebrate Mass in Corinth before proceeding to Athens where we will check-in at our local hotel and celebrate a farewell dinner on our last night.

Transfer to the airport for departure, taking with us images and appreciation of the ministry of St. Paul and early Christianity.

Coming Soon!
Contact Tekton Ministries to reserve your spot on this life-changing pilgrimage
“In him we live and move and have our being, for we too are his offspring…Since therefore we are the offspring of God, we ought not to think that the divinity is like an image fashioned from gold, silver, or stone by human art and imagination.”
-- St. Paul’s Speech at the Areopagus