Follow in the footsteps of St. Paul and the early Church. See where the first European baptism took place, visit the sites of the Seven Churches of Asia spoken of in the Book of Revelation, and be mesmerized by the Byzantine monasteries perched precariously on the mountainsides. Return home with a fresh perspective on the culture and life of the New Testament communities.

A Truly Catholic Pilgrimage
$3,465
per person

Our pilgrimage begins today as we depart on our flight to Greece. Meals and drinks served aloft.

Upon arrival in Athens, we will be greeted by our guide and transferred to our hotel for check-in. (D)

This morning our journey begins as St. Paul’s journey often began, by diving into the secular world. While the remainder of our pilgrimage will be devoted to sacred sites of Christianity, we would be remised to not visit the Acropolis, the Parthenon, and the Ecrectheum. In the Acts of the Apostles, chapter 17, St. Paul began his mission in Athens, gaining a handful of followers for Christ and thus planting the seeds of the faith in Greece. Drive around the city of Athens to see the House of Parliament, the Tomb of the Unknown Soldier, and the Presidential Palace. In the afternoon drive along the scenic coastal road and follow fairly the same route that the Apostle took to the ancient city of Corinth where he preached and lived for nearly two years. Visit the Archaeological Museum, the Market Place, the Bema and the Temples. We’ll celebrate Mass in Corinth before returning to our hotel. (B, D)

Depart Athens and drive north to Delphi, the center of the ancient world. We will take a walking tour of the Sanctuary of Apollo and the Temple of Apollo which served as the home of the Oracle of Delphi. The tour will also include the theater, the stadium where festivals and games were held in honor of the Sun God, and the museum that contains exquisite pieces of sculpture among which is the Bronze Charioteer. Then proceed to Meteora where we will experience one of the most unusual and spectacular highlights of the pilgrimage as we visit a number of world-famous Byzantine monasteries perched precariously atop the summits of gray rock pinnacles of varied sizes and shapes. The panoramic view is breathtaking. Originally Greek Orthodox monks fled to caves in the vicinity for protection and solitude, and to gain greater security, went even higher. Their spiritual artwork is splendid. After visiting Meteora we will continue on to Kalambaka for overnight. (B, D)

Today we will depart Kalambaka and proceed through the ancient city of Pella, the birthplace of Alexander the Great, to Beroea, also known as Veria or Veroia. St. Paul fled here after he was threatened in Thessalonica. We will celebrate Mass at the “Dais of the Apostle Paul,” and then visit the Bema, the monument to the apostle Paul; the small Byzantine Basilica of the Resurrection of Christ; and one of the town’s most notable monuments, Hagios Vlasios, which is dedicated to St. Blaise. We will then proceed to Thessaloniki which St. Paul visited on his second missionary journey in 49 A.D. and where he founded a church, was heavily persecuted, and wrote two letters to the residents. Visit the old city ramparts, the Archaeological Museum, and St. George’s Church – an ancient Roman monument that was transferred into a church. Then see the two most beautiful basilicas in the city, St. Demetrius, dedicated to a distinguished member of the Roman army and a martyred Christian convert, and St. Sophia. Overnight in Thessaloniki. (B, D)

Today’s sightseeing begins with a visit to Philippi, which was the first European city in which St. Paul preached his evangelical sermon and baptized the first Christians. A crypt here dating from the Roman period is thought to have served as a prison for St. Paul. See the Acropolis, the Basilica, the Theater and the Market Place. The highlight of the day will be an outdoor celebration of the Mass alongside the river where Paul preached and baptized Lydia, his first European convert. Continue to Kavala, the ancient port of Neapolis where St. Paul landed with his disciples, Timothy and Silas. Luke, the Evangelist, also came here from Troas. Kavala was later named Christopoulos because it was the first European city to accept Christianity. Here we will visit the Greek Orthodox Cathedral of St. Paul and St. Nicholas Church. Overnight in Kavala. (B, D)

Early this morning we will depart from Kavala and drive to the Greek-Turkish border and cross into Turkey. Then take a ferry across the Straits of the Dardanelles to Canakkale. Proceed to Pergamum, the most favored of the Seven Churches where Christianity was introduced very early. Here we will see the Temple of Zeus, the Temple of Athena, the fabled Acropolis and the Royal Gate. We will also visit Asclepion, one the foremost healing centers of the ancient world. On to Thyatira, another of the Seven Churches. Continue on to Izmir for overnight. (B, D)

Following breakfast we will visit the Church of St. Polycarp, the oldest church in ancient Smyrna, where we will celebrate Mass. Polycarp, the fourth Bishop of Smyrna, is known as one of the first Christian martyrs. Then drive to Sardis, the Lydian capital city where money was first minted, to visit the marble road of the Roman Gymnasium and the remains of the Artemis Temple which symbolized one of the Seven Churches. Then proceed to Ephesus where St. Paul spent two years during his ministry. It was to this community that St. Paul wrote his Epistle to the Ephesians. St. Paul implored the Ephesians to cease their worship of Artemis and to turn to Christianity. We will see the great theater where Paul addressed the crowds and visit the site of the scene of the riot from which Paul escaped. Visit the Temple of Diana which is one of the Seven Wonders of the Ancient World, the Church of the Virgin Mary, and the Tomb of St. Luke. Then visit the Basilica of St. John, which was erected over his grave in the 6th century A.D. by the Emperor Justinian. Proceed to the colorful port town of Kusadasi for overnight. (B, D)

This morning we will board a ferry for the Greek island of Patmos where St. John received the mystical Revelation which forms the last book of the New Testament. Upon arrival we will visit the Grotto of Revelation and the 11th century Monastery of St. John which houses the original script of the Gospel. We will then return by ferry to Kusadasi for overnight. (B, D)

This morning we will depart Kusadasi and proceed to the House of the Virgin Mary which is believed to be the last residence of the Virgin Mary, mother of Jesus. According to tradition, Mary was brought to Ephesus by the Apostle John after the Resurrection of Christ and lived out her days there. After Mass we will proceed to Izmir to catch a flight to Istanbul, ancient Constantinople. Upon arrival in Istanbul, we will visit the Grand Covered Bazaar, built by Sultan Mehmet the Conqueror between 1455-1461 in an attempt to enrich the economic life in the city. Today, its alleys and buildings house more than 4,000 shops selling carpets, furniture, leather goods, copper goods, jewelry and touristic items. Overnight in Istanbul. (B, D)

Today enjoy a full day of sightseeing encompassing Istanbul’s Byzantine and Ottoman Heritage. The tour will start with a visit of Hagia Sophia Museum (the Byzantine Imperial Basilica of Holy Wisdom built by Emperor Justinian in the 6th century 532-537AD) which is one of the Seven Wonders of the Ancient World, the Mosque of Sultan Ahmet which is also known as the Blue Mosque, and the Roman Hippodrome built by the Roman Emperor Septimus Severus in 203 AD which houses the Egyptian Obelisk and Serpentine Column. Continue our tour with a visit of Topkapi Palace, the residence of Ottoman Sultans Between the 15th and 19th centuries. Then visit the Basilica Cistern which were built by Emperor Justinian in 542 AD. The last visit of the day will be the Kariye Museum (Saint Savior in the Chora), which is a Byzantine monastery complex dating back to 8th century AD. Only the church of Jesus Christ the Savior remains today which houses marvelous golden Byzantine mosaics and frescoes depicting the life of the Virgin Mary and Christ. (B, D)

Transfer to the airport to catch our return flight home, taking with us all the blessings and graces of this pilgrimage. 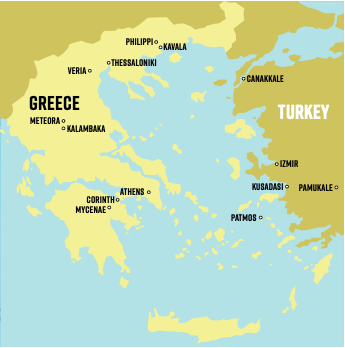 Contact Tekton Ministries to reserve your spot on this life-changing pilgrimage
"My favorite moment was having mass at the river where Lydia, the first European convert, and her family were baptized. It was so peaceful there... and profound."
- Rev. Matthew V., pilgrim from Weston, NE
"The tour guides did a super job, were very personable and patient, had a great education which they shared well and also had a sense of humor."
- Matthew W., pilgrim from Omaha
"I think that passages of Scripture will be much more meaningful to me, of course. Even this morning, going back to the Book of Revelation...I knew exactly what John was talking about."
- John F., pilgrim from Memphis