Pilgrimage in the Footsteps of St. Paul - Greece and Turkey 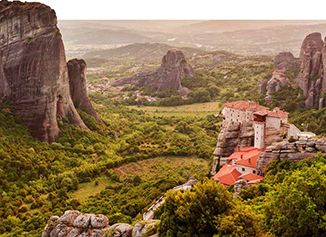 Today we begin our journey east to follow in the footsteps of
the first great missionary disciple, St. Paul.

After our morning arrival into Athens, our journey begins
as St. Paul’s journey often began; by diving into the secular
world. While the remainder of our pilgrimage will be devoted
to sacred sites of Christianity, we would be remised to not visit
the Acropolis, the Parthenon, and the Ecrectheum. In Acts of
the Apostles, chapter 17, St. Paul began his mission in Athens,
gaining a handful of followers for Christ and thus planting the
seeds of the faith in Greece. We will take time for prayer at Holy
Apostles Church (which dates back to the 10th century) and the
Mitropoli (Cathedral), the seat of the Archbishop and hub of the
Greek Orthodox Church. (D)

Our journey continues north today as we leave Athens. Our first
stop is at the Byzantine monasteries at Meteora that seem to
precariously perch on the very edge of the cliffs. We will ascend
to these sacred retreats via cable car, but you can only imagine
how hundreds of years ago monks were ascending on foot! Our
final place for prayer today will be the Kalambaka Cathedral,
Church of the Dormition, for vespers with the community. (B/D)

St. Paul leads us further into his journey to Thessaloniki, home of
another early New Testament community he evangelized. Mass
will be offered at the “Dais of the Apostle Paul,” in Veria and we
will also spend time at the Byzantine basilica of the Resurrection
of Christ. Once in Thessaloniki, we will have time for prayer at
the Byzantine churches of St. George, St. Demetrius, and Agia
Sophia. The evening will be free to explore the city. (B/D)

We begin our journey today toward Philippi, where St. Paul
preached and baptized some of the first Christians in Europe,
and descend into a crypt that served as a prison for St. Paul
when he was held captive here. Mass will be offered alongside
the river where St. Paul preached 2000 years ago and baptized
Lydia, his first European convert. Our day ends in Kavala,
the ancient port of Neapolis, where St. Paul landed with his
disciples, Timothy & Silas. St. Luke the Evangelist also came
here from Troas. We will have time for prayer at the Orthodox
Cathedral of St. Paul and St. Nicholas Church. (B/D)

Today we leave Greece behind and cross the border into Turkey,
taking a ferry across Straits of the Dardanelles to Canakkale.
Overnight in Canakkale. (B/D)

Depart Canakkale and drive to visit Pergamum, the most favored
of the Seven Churches of Revelation where Christianity was
introduced very early. Here we will see the Temple of Zeus, the
Temple of Athena, the fabled Acropolis and the Royal Gate. We
will also visit Asclepion, one the foremost healing centers of the
ancient world. Continue on to Thyatira, another of the Seven
Churches. Then visit the Church of St. Polycarp, which is the
oldest church in ancient Smyrna and is dedicated to one of the
first Christian martyrs. Proceed to Izmir for overnight. (B/D)

Following breakfast, drive to Sardis, the Lydian capital city
where money was first minted, to visit the Roman Gymnasium
and the remains of the Artemis Temple, which symbolized one
of the Seven Churches. We will then stop at Philadelphia which
was referred to as the “New Jerusalem.” Proceed to the spa city
of Pamukale, where we will see the cascading water from the cliffs forming crystallized, dazzling white “frozen waterfalls”.
Visit the ruins of the Roman health spa of Hierapolis and see
the magnificently preserved Necropolis, the Main Street, and
Gates. Overnight in Pamukale. (B/D)

Depart Pamukale and drive to Laodicea, one of the Seven
Churches where Christians were chastised by John for being
lukewarm. Then proceed to Ephesus to visit the site of the
Temple of Artemis, which is one of the Seven Wonders of the
World. Paul spent two years in Ephesus, and it was to this
community that he wrote his Epistle to the Ephesians. Paul
implored the Ephesians to cease their worship of Artemis and
to turn to Christianity. We will see the great theater where Paul
addressed the crowds and visit the site of the scene of the riot
from which Paul escaped. Visit the Church of the Virgin Mary,
the House of Mary, and the Tomb of St. Luke. While driving to
the colorful port of Kusadasi, we will visit the Basilica of St.
John, which was erected over his grave in the 6th century A.D.
by the Emperor Justinian. (B/D)

Transfer to the pier at Kusadasi and take a ferry to the island of
Patmos where St. John received the mystical Revelation which
forms the last book of the New Testament. Once we reach the
island, we will take an excursion to the Grotto of Revelation
and the 11th century Monastery of St. John which houses the
original script of the Gospel. We will then board an overnight
ferry for Piraeus. (B/D)

This morning we will disembark from our overnight ferry in
Piraeus and then drive to ancient Corinth, the city that inspired
many of St. Paul’s most familiar letters. Visit the Archaeological
Museum, the Market Place, the Bema, and the Temples. Standing
in the midst of the ruins of the church of Corinth and seeing the
pillars, steps, and public worship place where Paul preached
will enhance our understanding and love of I & II Corinthians.
We’ll celebrate Mass in Corinth before proceeding to Athens for
check-in at our local hotel. Celebrate a farewell dinner on our
last night. (B/D)

Today we end our pilgrimage as we fly home to Memphis. (B) 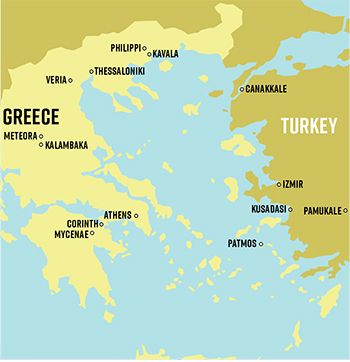