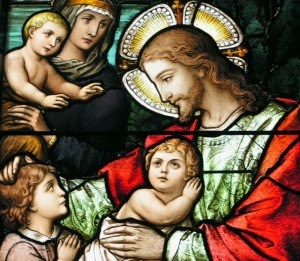 In the first reading, people are arguing, fighting, coveting, and unsatisfied with their position. They are focused on worldly things, which are unsatisfactory, instead of focusing on spiritual things. If they would ask God for what they truly need, they would be satisfied, but they go against God by coveting things of the world. They love the world and do not love God, and without God there is no satisfaction. If the Lord does not build a house, then in vain do the builders labor.  The fighting and the focus on the world actively turns them away from God, who could be their support. If they would, as the psalm suggests, throw their cares on the Lord, he would support them, but they choose instead to put their energies and focus elsewhere, and they get no support, and no satisfaction.
And the disciples themselves are no better. They fight amongst themselves over who is the greater. They are fighting with each other and coveting position and thinking of more worldly issues, even as Jesus is telling them one of the most important aspects of the religion. He is telling them that he will die and rise from the dead, but they did not understand what he was saying and what he meant, so they squabbled amongst themselves over who was most important in their group. Don’t people today still ignore the bigger issues of the faith and instead squabble over details and issues of politics and over who is most important. When Jesus finds out that his own people have been ignoring his teaching and instead fighting with each other over importance, he gives a lesson on what is important. He says that the greatest is not the richest or most powerful, the greatest is the most helpful: the opposite of the one at the top. He brings in a child – the least powerful, most vulnerable – someone who can give no benefit but requires the most help. And he says whoever helps a child, the least important of people, will be receiving Jesus and God himself.

Instead of hating each other, we could be loving God, and one of the best ways to love God is to love his people. What better way to show God our appreciation than to appreciate and respect, even love, his creation. Loving each other, treating each other decently – even the poor, especially the poor – is the best way to have satisfaction in our lives. Those who love the lowest, least important people, those who give with no expectation of benefit, will receive the greatest benefit. The things of the world are not the most satisfying, but the love of God can satisfy all.
(Adapted from Tami Whitney)