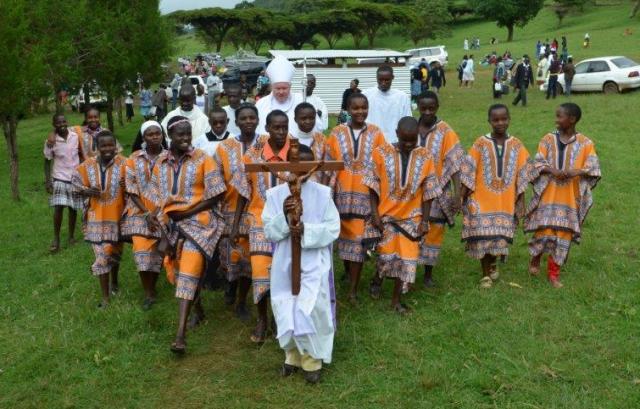 Kenya: A site of pilgrimage

A pilgrimage site in Kenya is becoming a place of peace and prayer for more than just Catholics.

The Village of Mary, Mother of God is the National Marian Shrine located in Subukia 40 km from Nakuru. The Shrine is entrusted to the care of Conventual Franciscan Friars. It is a place of peace, prayer, reconciliation and rest. You are welcome to visit us and spend some time in prayer and meditation.

At the foot of the hill you will find a little chapel of Mary Mother of God in which you can spend some time. The new chapel was blessed on 11th of December 2010 by very Rev. Fr. Laurence Mbogo the Vicar General of the Catholic Diocese of Nakuru. And if you venture up the hill, you will find another chapel with the statue of Our Lady and the miraculous spring of water. Spend some time there, drink the water and you will come down refreshed both physically and spiritually.

Article written by Eric Matara:
Located in the Great Rift Valley Escarpment in Subukia is one of Kenya’s major religious sites.

Although it is meant to be a shrine for Catholic pilgrims, the Village of Mary Mother of God is also a tourist attraction.

It was named the Village of Mary Mother of God in 1984 by Maurice Cardinal Otunga.

On October 3, thousands of Catholics gathered at the shrine, about 40km from Nakuru Town, for a Eucharistic Congress.

The congress brought together people from all parts of Kenya and beyond.

Subukia, which is derived from the Maasai word isupuku, meaning higher grounds, is also a meeting place of two hemispheres, as the Equator runs through it.

At the foot of the hills housing the shrine is a small chapel, where both Catholic and non-Catholic worshippers confess their sins before proceeding up the hills.

However, the walk up is not just another casual one. Along the way, there are 14 prayer stations, commonly known as ‘The Way of the Cross’.

There are prayers to recite at each station to commemorate how Jesus carried the Cross before He was crucified.

The shrine is the source of a spring of cool waters believed to have healing powers.

The spring started flowing in December 1991, and has never dried up.

On the eve of the Feast of the Immaculate Conception of Mary, on December 1991, it is said that while clearing the thick bush where the shrine was to be erected, Mr Henry Muthuku, a supervisor, stumbled on a wet patch on the ground that had a small spring of water.

Many pilgrims carry containers to fetch the ‘holy’ water from the spring.

There are no entrance charges to the shrine.

At the center of the compound is a new chapel being constructed.

It is designed in the shape of the crown of Mary the Mother of Jesus.

It has 12 corners, symbolising the 12 stars in Mary’s crown, and 12 pillars indicating the 12 Apostles of Jesus.

Upon completion, the chapel is expected to host more than 4,500 worshippers.