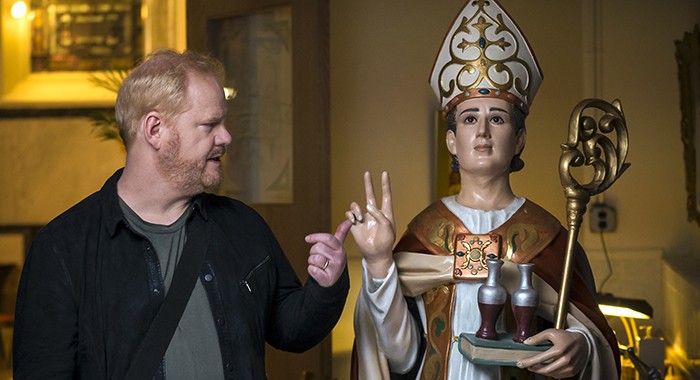 (CNA, By Adelaide Mena) God and comedy clubs are not generally something most families throw together; then again, most families don’t create a cable comedy show either.

But for Jim and Jeannie Gaffigan, this mix of faith and funny is a vital part of their family life – a life that they draw upon in creating their latest project, a cable TV show.

“Mixing these worlds – the world of standup comedy and one’s faith – can provide conflict and humor,” said Jim Gaffigan, who co-wrote and stars in The Jim Gaffigan Show.

His wife Jeannie, the other comedic mastermind behind the show’s script and the new program’s executive producer, hoped their family’s experience mixing spheres of personal, religious and public life would appeal to other families navigating a sometimes strange world.

“It’s normal families that are in this very abnormal situation and all the things that inform their interactions with other people. And there’s a lot of comedy in that,” she said. “People relate to it. People laugh at it.”

The new show will premiere on TV Land July 15, and preview episodes are already available online at www.jimgaffigan.com. Many of the plots in the new series, the couple explained, come from their personal experience of living as a Catholic family in lower Manhattan: a neighborhood where spotting hipsters and bohemians is much more likely than spying a family with five kids.

Funny has been a part of this family’s dynamic for years: the couple met in 2000 and began working together, getting married in 2003. While raising their family, the couple worked on writing and creating comedy shows like “Beyond the Pale” (2006) and the Grammy-nominated “Mr. Universe” (2012), which Jeannie produced and Jim starred in and performed. The duo also worked together to write Jim’s 2012 comedic memoir “Dad is Fat,” and a second collection of essays, “Food: a Love Story,” which was published in 2014.

Most of the new show is set in an exact replica of the fifth-story, two-bedroom apartment the family recently moved out of, or in the surrounding New York neighborhood. In the opening episodes available online, fictionalized versions all seven members of the Gaffigan family make an appearance, along with other characters Jim and Jeannie’s personas run into during daily life. 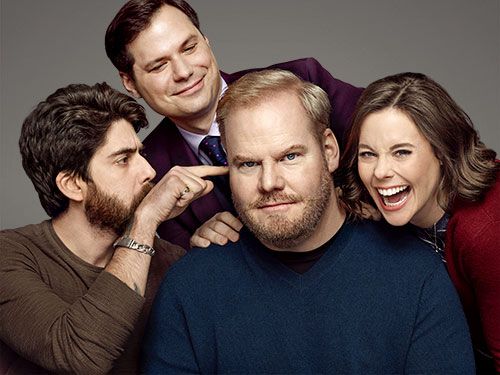 Jim said that when writing the show, the Gaffigans focused on the contrast between a relatively normal family life and the offbeat reality of New York and the comedy club scene as a means of connecting with a wide audience. “We wanted to present it as this conventional family in this unconventional world, and that’s really what it is for every family in America,” he said in a recent press call.

Jeannie elaborated that this contrast also comes from their desire to be honest about themselves. “It’s a show about our lives; this is what we do.”

“We made a decision not to hide any of the spectrums of our life. There’s the Church and there’s the comedy club and they’re sort of diametrically opposed,” Jeannie explained, saying that she and her husband sought to show the reality of both parts of their lives without disparaging either.

Given that faith and the generally secular world of comedy rarely mix – especially on cable TV – Jim said that the tensions the show explores offer some new comedic ground. “The good thing is that these topics, or even these angles into comedy, are fresh.”

Talking about – and even laughing about – the tensions surrounding religion can be a teaching opportunity too, Jim said. He described such humor as a way of neutralizing the challenge of hiding one’s faith in order to tackle the challenge of surprising an audience.

“They’re either going to assume I’m going to bag on religion or they’re going to think that I’m going to say something that they’re not going to relate to and I sort of love that challenge,” he commented.

The experiences the Gaffigans have had in their lives work their way into the characters as well as the plot, the couple explained. “We just write what we know, and the priest character that we write in the show was based on some really fantastic people that we have in our lives,” Jeannie said.

Jim added that when writing the role of the pastor, “we’re fighting any of the cliches of a priest character.” The couple tried to ensure that he was “not a bumbling buffoon or alcoholic” but a source of wisdom. 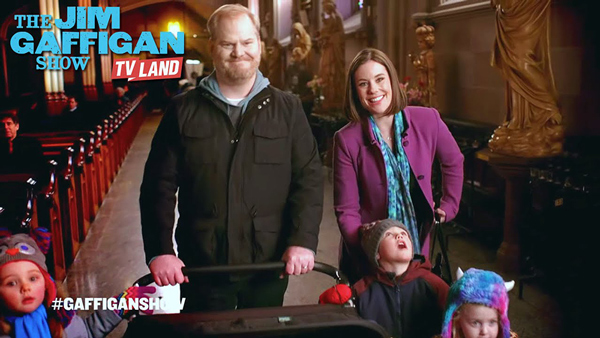 As in the Gaffigan’s real life, the religious characters of the show are integrated into the fictional Gaffigans’ world. In a future episode, a priest is invited to go to a late-night show taping with Jim’s character, a situation based on a real-life events with the priest who married them.

This mixing of secular and religious allows for the exploration of Jim’s character’s faith and uncertainties with bringing this aspect of his life into the public square. “Some of the message is that it’s my fear – most other people don’t care, and I’m projecting that fear on other people.”

“Jim’s character is less religious than me, so Jim’s response to that is similar to my response 10 years ago,” he said.

This honest look at faith and doubt, along with its lighthearted approach, Jeannie said, allows the show to deal with its characters’ faith in a way that’s neither too sweet nor too dour. “I think Jim and Jeannie seem Catholic and being flawed without being stereotypical cartoons of what people would perceive a Catholic family to be.”

Jim pointed to an example of dialogue between the Jim and Jeannie characters where the faith informs the comedy in this frank way.

“When Jeannie’s mad, she might say, ‘I don’t want to raise five kids by myself,’ he explained. “And Jim would say, ‘You’re going to divorce me?’”

“No! I’m Catholic,” Jeannie’s character jokes. “I don’t believe in divorce. I would murder you.”

Even if the characters joke about these normal tensions between spouses, ultimately creating the show was a family affair – one that both Jim and Jeannie participate in, open their family life to and hope fans find fresh and engaging. “Hopefully, whether they’re brand-new or not, they’re unique and true to our experience.”