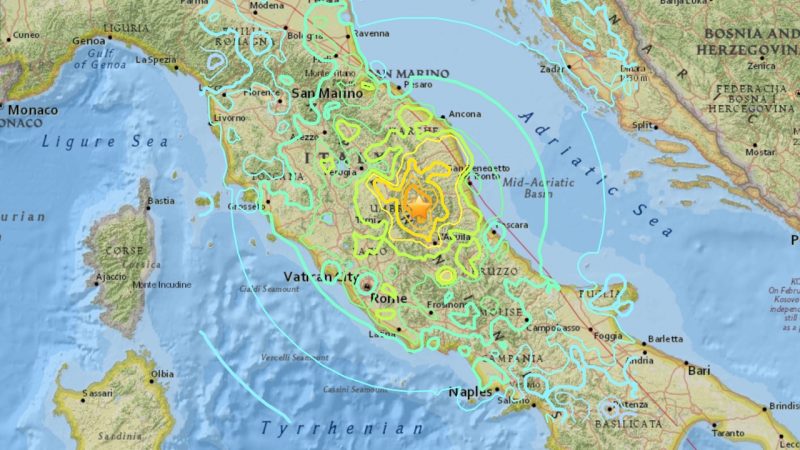 Sister Marjana Lleshi awoke in the early hours of Wednesday morning to the violent shaking of the 6.2 magnitude earthquake that killed 250 people, devastating several towns in central Italy.

Wounded and trapped under her bed as her convent in Amatrice crumbled to the ground around her, Sr. Lleshi thought for sure that death was imminent, and began sending messages to loved ones telling them goodbye.

However, just when her hope had run out and she was ready to let go, she heard the voice of Louis, a young Columbian caregiver assisting at their home for the elderly, calling out for anyone who might still be alive – a voice she refers to as her “angel” from God.

“I looked around and saw everything was crumbling,” Sr. Lleshi said in an Aug. 25 interview with SIR, the official news agency of the Italian bishops.

She said she had woken up about 30 minutes after the initial shock from the earthquake around 3:30 a.m., and saw rubble falling around her as she came to her senses.

“I had a cut on my head and I asked for help. I looked toward the street, where people were lost and confused,” she said, but “no one responded to me.”

As the building continued to crumble, Sr. Lleshi said she had just enough time to grab a sweater and her veil before taking refuge under her bed, where she decided to stay until help arrived.

“It was at that point that I resigned myself,” she said. “I asked for help in vain. So I began to send messages to loved ones warning that there was an earthquake, that there was no longer hope, that I would die and that it was farewell.”

Though she tried to hold on to her will to live, the nun said she lost hope when no one came, and began to think about those dear to her and the choices she had made in life.

Sr. Lleshi, 35 and originally from Albania, is a religious sister of the Handmaids of the Lord. She had been living in the community’s house in Amatrice, one of the towns hardest hit by the 6.2-magnitude earthquake that tore through central Italy early Wednesday morning, killing 250 people.

The epicenter of the quake hit the town of Norcia, about 65 miles northeast of Rome, at 3:36 a.m. with several aftershocks following. According to the BBC, after the tremors stopped the mayor of Amatrice said “half the town is gone.” Rescue efforts are still underway to free anyone who might still be alive, and to search for the bodies of those who were buried under the rubble.

Sr. Lleshi quickly became the face of the quake’s destruction when a photo taken by Italian news agency Ansa began to circulate on social media, depicting the nun sitting on the side of the road with a bloodied face and veil.

There were 15 people in total staying at the convent at the time of the quake, including the elderly the sisters attended. Of them, four elderly and three sisters have died – their bodies remain buried in the rubble.

The convent and home for the elderly was located at the entrance of Amatrice and, like the rest of the historic center, was completely destroyed by the earthquake.

Sr. Lleshi told SIR that when Louis finally came to look for survivors, he picked her up and began leading her to safety when they heard the cries of two other sisters.

“Among the rubble I heard one of our sisters asking for help. While we tried to understand where the voice was coming from, we heard another sister complaining because she couldn’t breathe and her legs were blocked,” she said.

In the end the Sr. Lleshi and Louis couldn’t move the rubble in order to rescue the other sisters, so they waited beside them until the rescue workers arrived.

The two sisters were sent to the hospital in neighboring Rieti, where they are currently recovering. Sr. Lleshi, however, is currently staying in Ascoli Piceno, where she was treated and kept under medical supervision.

Referring to Louis, Sr. Lleshi said he was “the angel that God sent when I thought I would die and when everything around me was crumbling. It was leveled to the ground and I was like the tip of an inverted cone in the midst of the rubble of crumbs.”

The nun said she doesn’t know why God spared her, only that “I saw a God who, in the midst of death, gave life.”

“Thinking of the sisters who are still under the rubble, I have to say that I am no holier than them. So I ask myself, why was I saved and not them?” she said, tearing up.

She noted that “many families are destroyed” and that many people, including Louis, have risked their lives trying save people who could still be alive.

When asked if hope can be found in “angels” like Louis and the rescue workers, Sr. Lleshi said religion doesn’t have anything to do with it, because “we men were made to love and to help others.”

Tragedies such as the earthquake, she said, “reveal what man is regardless of his religion, of his culture, of the goodness of the person itself. Take me. I am no better than the people who didn’t make it. I was saved. Why?”

“Asking me now is useless,” she said, “because I will never have an answer. But sooner or later I will understand, God willing, what he wants of me.”