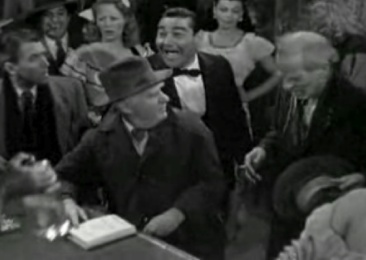 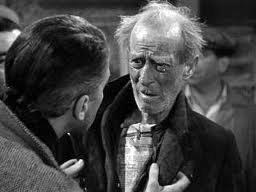 “It is not right to take the food of the children and throw it to the dogs.”  She said, “Please, Lord, for even the dogs eat the scraps that fall from the table of their masters.”
Do you remember Mr. Gower, the druggist from the famous movie, “It’s a Wonderful Life”?  During the time when George Bailey is seeing what life would have been like without him, there is a scene when Mr. Gower, suffering from alcoholism, stumbles into Martini’s Bar (no longer Martini’s) looking for handouts.  At George’s shock and amazement, Mr. Gower, homeless and in rags, takes abusive treatment from the bartender and others present.  After being sprayed multiple times in the face with carbonated water, he laughs pathetically and continues to take abuse, hoping to finally receive the handout.
That is the image that comes to mind as I read the Gospel for today.  Call it what you will, a test, a trial of the woman’s faith.  Either way, however, Jesus’ words are insulting, objectively speaking.  He calls her a dog and refers to her people, non-Jews, as dogs.  “It is not right to take the food of the children and throw it to the dogs.”  The word was an insult the Jews used to describe the Gentile, non-believers who they believed were dishonorable pagans.
Jesus knew what he was doing but nobody else did.  Imagine hearing these words from a man who had seemed so caring toward others.  What must they have thought?!?  (Jesus, of course, then compliments the woman on her faith and performs the miracle, thanks to her intercession.)  But here’s the  point…
How desperate must that woman have been?
Mr. Gower, having accidentally killed someone, had been imprisoned and after being released, had dropped to such a bottom that he, who was a known and respected druggist was left homeless and destitute, spending the rest of his life willingly be mistreated and abused just for a handout.  So ,too, the woman.  She was so desperate due to the condition of her daughter that she was willing, not only to be verbally and emotionally abused, but was also to agree with and cooperate with the abuse- if it meant she could convince Jesus to heal her daughter.
This is NOT to say women, nor anyone, should put up with abuse of any kind. Hear me.  But it is to try to identify with how desperate this woman was. Only when we are that desperate do we sacrifice our reputation and the image others have of us to simply try to survive.
That is a place of true pain.  And as Jesus and the woman show us, it is a place of true and real redemption.
Here’s to you, Mr. Gower.