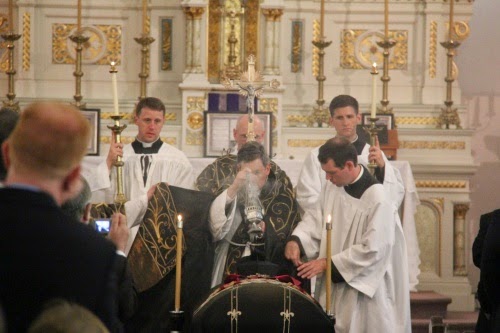 (CNA).- Faithful who attended the funeral for Father Kenneth Walker were dismayed at the presence of picketers from the Westboro Baptist Church on June 20 near Paxico, Kansas.
As mourners filed into Sacred Heart Catholic Church, members of the hate group stood nearby holding signs and singing songs in order to broadcast their message.
A priest with the Fraternity of St. Peter, Fr. Walker, 28, was shot and killed while coming to the aid of Fr. Joseph Terra at their parish, Mater Misercordiae Mission, in Phoenix on June 11. Fr. Terra, 56, suffered several injuries but was released from the hospital June 16.
Those in attendance at Fr. Walker’s funeral were disheartened that a group would want to protest at such a difficult time for family and friends.
“I thought it was very inappropriate timing, very inconsiderate for what people are going through right now,” funeral attendee Bridget Bogowith said of the protestors. “It’s really uncaring. I was just quite shocked to see them here.”
Funeral attendee Michael Drake said the Catholic response to such protests is a peaceful one.
“We pray for them,” he told CNA. And while he wished the group no ill will, Drake said he was confounded as to why people who believe in God would want to protest the funeral of a priest.
“It seems really unusual that folks would picket the funeral of a man who gave up so many things, including the possibility of a wife and family, in order to serve God,” he said.
Members of the Westboro Baptist Church are known for picketing funerals, particularly those of soldiers. According to their website, group member believe God is punishing America through war due to the country’s immoral society.
Drake’s mother Claire said she felt sad for the protestors and didn’t understand why they would want to picket funerals.
“I know that if one of their ministers died, I would be very sad for his family, I would be concerned, I certainly wouldn’t be protesting in front of their church,” she said. “I just think it’s a sad and not terribly Christian thing.”