(By Patricia Montemurri, Detroit Free Press) Michigan-bred Vatican astronomer and Jesuit Brother Guy Consolmagno will become the first clergyman awarded one of planetary science’s most prestigious awards, when on Thursday in Arizona he receives the Carl Sagan Medal.

And then Consolmagno, for two decades the curator of the Vatican’s meteorite collection, plans to head to metro Detroit where he grew up. He has a bittersweet assignment here: to retrieve and return to the Vatican three meteorites he loaned the Cranbrook Institute of Science in 2002.

The loan was Consolmagno’s way of paying tribute to Cranbrook’s summer science programs that intrigued him when he was a schoolkid attending Beverly Hills’ Our Lady Queen of Martyrs Catholic elementary school and University of Detroit Jesuit High School. 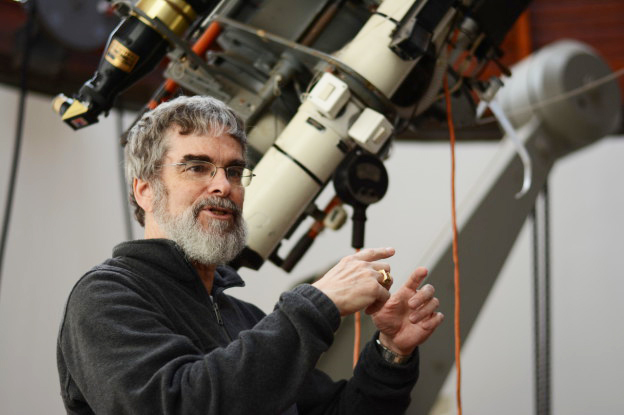 Consolmagno, 62, a member of the Catholic Jesuit order of priests and brothers, is being recognized for his witty, wise and engaging explanations of the heavens. He has authored or co-authored several books, such as “Would You Baptize an Extraterrestrial?” and “Turn Left at Orion,” has lectured around the world and even has an asteroid named after him.

The American Astronomical Society Division for Planetary Sciences annually honors individuals whose work has made scientific learning understandable and accessible to the public. The medal is named after astronomer Carl Sagan, who explained the heavens via the popular 1980s public TV series “Cosmos.”

Consolmagno “occupies a unique position within our profession as a credible spokesperson for scientific honesty within the context of religious belief,” read the announcement of his selection in July.

Consolmagno will receive the award during a convention in Tuscon, not far from where he often studies the solar system. The Vatican maintains an astronomical observatory nearby. The Vatican Advanced Technology Telescope (VATT) is atop Mt. Graham outside Tuscon. For much of his career, Consolmagno has lived outside Rome in Castel Gandolfo, the papal summer residence and also home to the Vatican Observatory.

Michigan-bred Jesuit is a Vatican astronomer and meteorite nerd

Consolmagno now expects to be spending more time in Tuscon. He relinquished his post as curator of the Vatican’s meteorite collection in August to oversee fund-raising for the Vatican Observatory Foundation. Its goal is to raise money for maintenance and modernization of the VATT telescope.

More than 1 million people likely have viewed the Vatican meteorites on display at the Cranbrook Institute of Science, said John Zawiskie, its earth and life sciences curator.

“I grew up just a short bicycle ride from Cranbrook and used to hang out at the museum all the time, so it was a joy for me to be able to loan them the samples,” Consolmagno said. “It was to have been a three-year loan — and that was 12 years ago.”

The Vatican meteorites are very small. There’s a meteorite thought to have fallen from Mars to Earth 1 million years ago, when an asteroid smashed into Mars. Consolmagno also is retrieving a stony meteorite that fell on Allegan, in west Michigan, in 1889 and a sample of chrondrules, considered primitive solar system rocks.

“When I’m on the floor, I hear people who are astounded that the Vatican has a meteorite collection,” he said. “It’s a nice way to cut in and say science and religion aren’t necessarily incompatible.”

Zawiskie said the display will be taken down starting Thursday, and Consolmagno is to pick it up next Monday, when the museum is closed.

During his visit, Consolmagno plans to visit with old friends, including his U-D High debate partner, Michael Timmreck, who works for the Army Contracting Command in Warren. They’ll probably watch the Lions’ away game at Arizona on Sunday, and Consolmagno said he can’t predict what’s in the stars for the team. 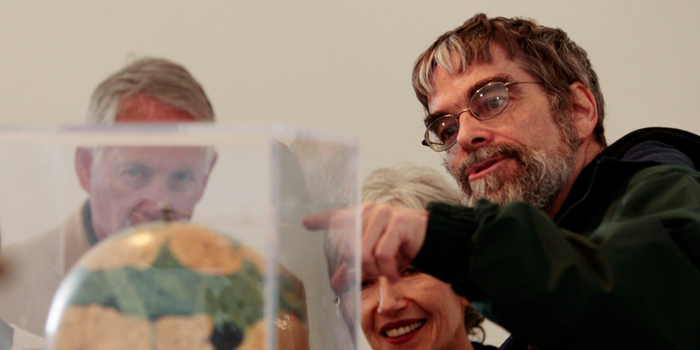 Last month, Pope Francis made headlines because he said that evolution is not in contradiction with church teaching. The pope, leader of the worldwide Roman Catholic Church, said the universe wasn’t created by God’s “magic wand.”

“The Big Bang, which today we hold to be the origin of the world, does not contradict the intervention of the divine creator but, rather, requires it,” the pope said. “Evolution in nature is not inconsistent with the notion of creation, because evolution requires the creation of beings that evolve.”

“There’s nothing new in what he was saying,” Consolmagno said of the pope. He noted that evolution is based on genetic theory, first discovered by the Catholic monk Gregor Mendel, who died in 1884.

The Big Bang theory, said Consolmagno, is based on work by Catholic priest Georges Lemaitre, who died in 1966. But the Vatican also has warred with astronomers and imprisoned Galileo in the 1600s for heresy for arguing that the Earth orbits the sun.

“But so many people have bought into the lie that science and religion are opposed, so the pope has to keep reminding the world otherwise,” Consolmagno said.

“He is an outstanding addition to the ranks of Sagan medalists,” Lopes wrote in an e-mail. “In these days of apparent conflict between science and religion, often for reasons of misunderstanding, it is really important to have people like Brother Guy, who shows how the two can co-exist.”

The Sagan Medal will be draped around Consolmagno’s neck before some 800 astronomers.

“I am embarrassed to admit just how pumped up I am to have been given that award; it really means a lot to me,” Consolmagno said. When he was a student at the Massachusetts Institute of Technology, he met Sagan.

“I remember how his enthusiasm and sense of humor helped him communicate the excitement of what we were doing in space. I’ve always tried to imitate that,” Consolmagno said.

“What I think is most important for people to know about science is that it is not a big book of facts, but a wonderful conversation, about not just what we see, but how we understand it,” Consolmagno wrote in an e-mail. “The big lesson everyone should learn from science is not that it’s ‘proved’ one thing or another, but that it is always open to learning more, and changing as it learns.”

Click here to read the article in it’s original location at the Detroit Free Press.