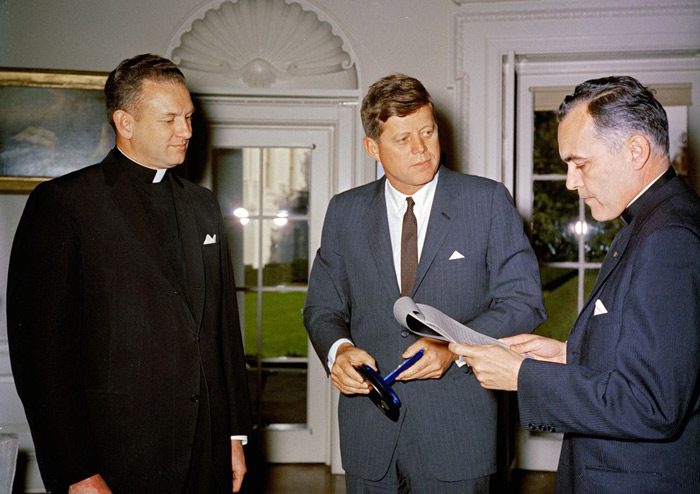 (Fox) The Rev. Theodore Hesburgh, who transformed the University of Notre Dame into a school known almost as much for academics as football and who championed human rights around the globe, has died. He was 97.

University spokesman Paul Browne told The Associated Press that Hesburgh died on the South Bend, Indiana, campus around 11:30 p.m. Thursday. The cause of death wasn’t immediately known, he said.

“We mourn today a great man and faithful priest who transformed the University of Notre Dame and touched the lives of many,” said the Rev. John Jenkins, Notre Dame’s current president. “With his leadership, charisma and vision, he turned a relatively small Catholic college known for football into one of the nation’s great institutions for higher learning.”

Hesburgh spent 35 years at the Notre Dame helm, earning a reputation as one of the nation’s top Catholic educators. But the man known simply as Father Ted to the thousands who attended the school while he was president from 1952 to 1987 was perhaps even more recognized for his work around the world on issues such as civil rights, immigration, peaceful uses of nuclear energy and Third World development. 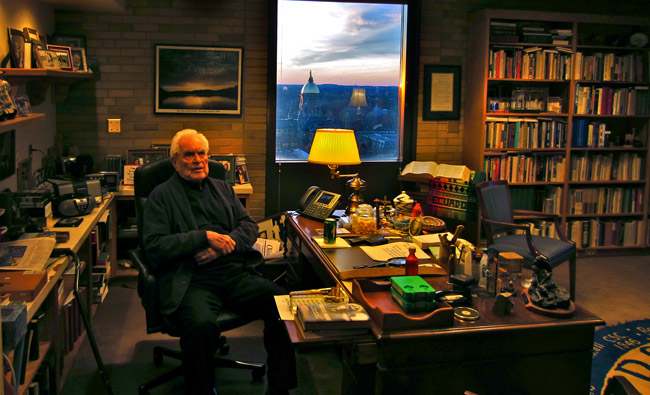 That work often took him far from campus — including Washington, Moscow and El Salvador — as he advised popes and presidents, at times challenging their policies. His aim was constant: Better people’s lives.

Hesburgh, who grew up in Syracuse, New York, was a charming and personable man who found as much ease meeting with heads of state as he did with students. His goal after coming out of seminary was to be a Navy chaplain during World War II, but he instead was sent to Catholic University of America in Washington, D.C., to pursue a doctorate, which he received in 1945. He joined the Notre Dame faculty that same year.

His star rose quickly. Hesburgh was named head of the Department of Theology in 1948 and became the university’s executive vice president a year later. He took over as president in 1952 at age 35.

His passion for civil rights earned him a spot as a founding member of the U.S. Civil Rights Commission in 1957 and found him joining hands with Martin Luther King Jr. at a 1964 civil rights rally in Chicago, singing “We Shall Overcome.”

Hesburgh was a man who wasn’t afraid to challenge authority. As Notre Dame’s executive vice president in 1949, he took on powerful football coach Frank Leahy while reorganizing the athletic department. When the Vatican demanded conformity to church dogma, Hesburgh insisted that Notre Dame remain an intellectual center for theological debate. He also famously challenged the civil rights record of President Richard Nixon, who fired him from the Civil Rights Commission in 1972. 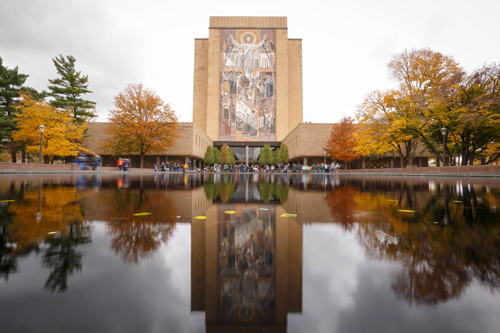 Hesburgh’s relationship with other presidents was smoother. He received the Medal of Freedom, the nation’s highest civilian honor, from President Lyndon Johnson in 1964 and later served on President Gerald Ford’s Presidential Clemency Board, charged with deciding the fate of various Vietnam offenders. In 2000, then-President Bill Clinton hailed Hesburgh as “a servant and a child of God, a genuine American patriot and a citizen of the world” as he bestowed upon him the government’s highest honor, the Congressional Gold Medal.

Hesburgh wrote several books, including one, “God, Country, Notre Dame,” that became a best-seller. Throughout his writings, he shared his vision of the contemporary Catholic university.

“The Catholic university should be a place,” he wrote, “where all the great questions are asked, where an exciting conversation is continually in progress, where the mind constantly grows as the values and powers of intelligence and wisdom are cherished and exercised in full freedom.”

In keeping with that philosophy, Notre Dame underwent profound changes under Hesburgh. Control of the school shifted in 1967 from the Congregation of the Holy Cross priests who founded the school to a lay board. The school ended a 40-year absence in football post-season bowl games and used the proceeds from the 1970 Cotton Bowl to fund minority scholarships. In 1972, Notre Dame admitted its first undergraduate women. Hesburgh called it one of his proudest accomplishments. 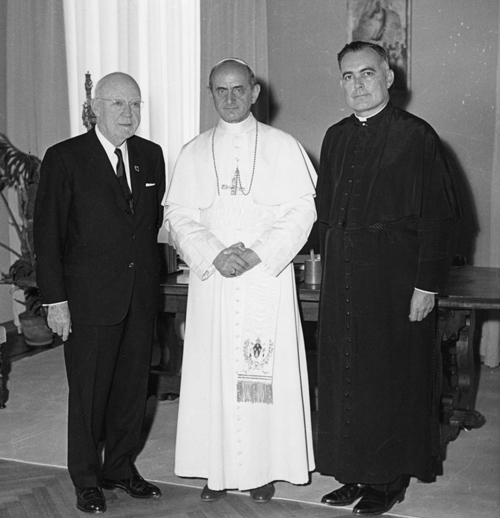 Hesburgh’s ambitions helped mold the university. The school was rather undistinguished academically when he became president. It had 4,979 students, 389 faculty and an annual operating budget of $9.7 million. When he retired in 1987, Notre Dame had 9,600 students, 950 faculty and an operating budget of $176.6 million. The school’s endowment grew from $9 million to $350 million during his presidency. When he retired, the school was rated among the nation’s most prestigious.

“I’m sure I get credit for a lot of things that I’m part of but not necessarily the whole of,” he said. “We began a great university and those who followed continued the motion forward.”

Hesburgh’s work earned him the cover of Time magazine in a 1962 article that described him as the most influential figure in the reshaping of Catholic education. He was granted 150 honorary degrees during his lifetime.

Despite the accolades, Hesburgh drew his share of criticism. Some said he spent too much time away from campus pursuing other issues. Others objected to the “15-minute rule” he implemented after students protesting the Vietnam War clashed with police on campus. Under the policy, students who disrupted the university’s normal operations would be given 15 minutes of meditation to cease and desist or would be expelled from school. 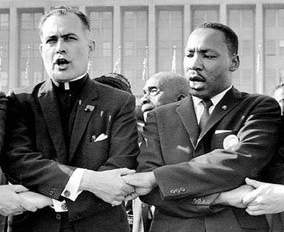 As a young priest, Hesburgh’s students included Jose Napoleon Duarte, whose 1984 election as El Salvador’s president set that country on a path to democracy after years of civil war. Hesburgh’s decision to have Duarte give Notre Dame’s 1985 commencement address was met by protests blaming Duarte and the Reagan administration for continued political killings and poverty in the Central American nation. Hesburgh wrote that the presentation of an honorary degree to Duarte didn’t mean the university has to agree with all he was doing.

Hesburgh also supported the university’s decision in 2009 to invite President Barack Obama to speak at commencement. At least 70 bishops opposed Obama’s appearance and Notre Dame’s decision to award him an honorary degree because of the president’s support of abortion rights and embryonic stem-cell research. Hesburgh said universities are supposed to be places where people of differing opinions can talk.

Jenkins, the current president, said Hesburgh’s greatest influence may have been on the generations of Notre Dame students he taught, counseled and befriended.

“Although saddened by his loss, I cherish the memory of a mentor, friend and brother in Holy Cross and am consoled that he is now at peace with the God he served so well,” Jenkins said.

The university said that a customary Holy Cross funeral Mass will be celebrated in the Basilica of the Sacred Heart on campus at a time to be announced. The university also said a tribute to Hesburgh will be held at the Joyce Center.