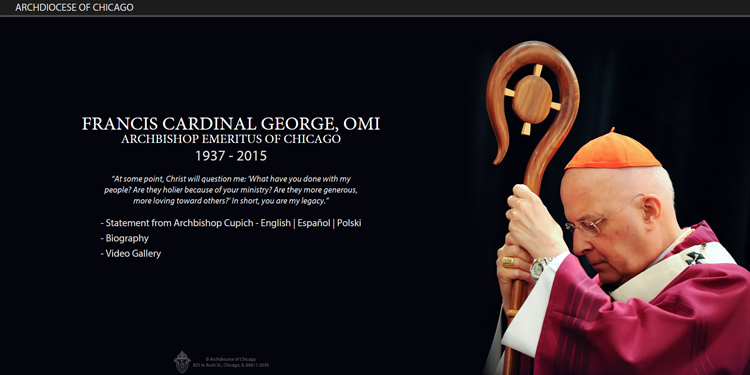 A man of peace, tenacity and courage has been called home to the Lord. Our beloved Cardinal
George passed away today at 10:45 a.m. at the Residence.

Cardinal George’s life’s journey began and ended in Chicago. He was a man of great courage
who overcame many obstacles to become a priest. When he joined the priesthood he did not
seek a comfortable position, instead he joined a missionary order, the Oblates of Mary
Immaculate, and served the people of God in challenging circumstances – in Africa, Asia and all
around the world.

A proud Chicagoan, he became a leader of his order and again traveled far from home, not
letting his physical limitations moderate his zeal for bringing the promise of Christ’s love where it
was needed most. When he was ordained a bishop, he served faithfully, first in Yakima, where
he learned Spanish to be closer to his people. He then served in Portland, where he asked the
people to continue to teach him how to be a good bishop. In return, he promised to help them
become good missionaries.

Cardinal George was a respected leader among the bishops of the United States. When, for
example, the church struggled with the grave sin of clerical sexual abuse, he stood strong
among his fellow bishops and insisted that zero tolerance was the only course consistent with
our beliefs.

He served the Church universal as a Cardinal and offered his counsel and support to three
Popes and their collaborators in the Roman congregations. In this way, he contributed to the
governance of the Church worldwide.

Here in Chicago, the Cardinal visited every corner of the Archdiocese, talking with the faithful
and bringing kindness to every interaction. He pursued an overfull schedule– always choosing
the church over his own comfort and the people over his own needs. Most recently, we saw his
bravery first hand as he faced the increasing challenges brought about by cancer.

Let us heed his example and be a little more brave, a little more steadfast and a lot more loving.
This is the surest way to honor his life and celebrate his return to the presence of God.

As we celebrate in these Easter days our new life in the Risen Lord, join me in offering comfort
to Cardinal George’s family, especially his sister, Margaret, by assuring them of our prayers,
thanking God for his life and years of dedication to the Archdiocese of Chicago. Let us pray that
God will bring this good and faithful servant into the fullness of the kingdom.

May Cardinal George rest in peace.