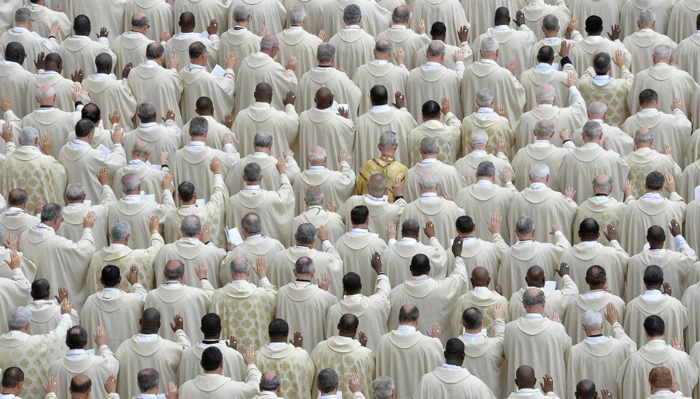 (Vatican Insider, by Pablo Lambo) At the world retreat of priests, the Bishop of Rome gave advice to priests about the relationship they should have with their faithful and also about ecumenism and how to give homilies and about the work of the laity. He also spoke out against clericalism. After his address, the Pope took questions from five priests

“Please, have mercy on the faithful people of God, don’t scare them off.” During a long an intense meeting marked by deep and sometimes simple reflections as well as some more light-hearted and jokey moments, Pope Francis gave a series of hints and tips to priests from all over the world, gathered in St. Peter’s Basilica. The Pope spent two hours with the priests this evening, addressing them entirely in Spanish. “I am glad to see women sitting here in the front rows because women receive the Holy Spirit, the female intellect is a gift in the Church, the Church is feminine, it is “la Iglesia” not “el Iglesia” (the Church in Spanish is female, Ed.). She is Christ’s bride, mother of the holy people of God,” the Pope recalled at the start of his meeting with the priests. “All the women here present are the image and figure of the mother Church; they are a special expression of co-operation; to so-called feminists they say that Mary is much more important than the apostles.” 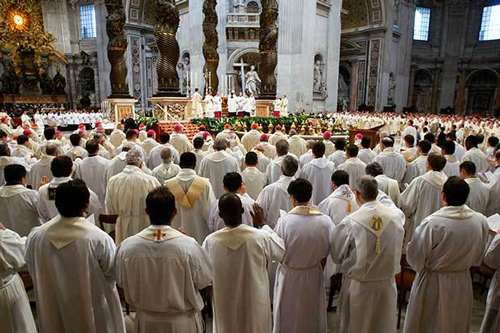 He then began his reflection by pointing out that “the first reason to evangelise is Jesus’ love. That love we receive, that experience of being saved by him. This inspires us to love each other more and more. Feel like you have been saved. I recommend that you read Ezekiel 16. Each and every one of you should see your own life story in this story – which is the story of the people of Israel that prostitutes itself and moves away from the Lord. But the most important it is the end. That is where the truth about each and every one of us lies: When we see how little we are, we feel a holy shame and we that Jesus does not consider us as a servant but a friend that serves his people. It is this love that drives us to evangelise and to communicate Jesus message. If we do not feel the desire to communicate it, then we need to gather in prayer and ask Him to captivate us again.”

The Pope also returned to the subject of priests’ tiredness. He said that “the holy people of God are ontologically Olympian but essentially tiresome. The people make you tired,” but the Pope urged priests to set aside this tiredness and not only contemplate Jesus but let themselves be contemplated by Him: “Here I am. It’s not easy to do this when one is tired, when someone has a lot of things to do and sometimes tiredness pulls you down and you fall asleep on the chapel floor. It is nice to let Him look at you like a father looks at his sleeping child. But you must go to the chapel to pray. Don’t stop doing that.” A chapel may be “boring and dry, it isn’t a television, but that is where love is.” Evangelising means “being in love and letting yourself fall in love,” despite the tiredness.

And speaking of love, Pope Francis also reflected on how to talk to people about Jesus. “How to preach? Or, forgive the neologism: How to “kerigmatize”, that is transmit the kerigma with that very certainty that the Holy Spirit gives?” the Pope asked. The first answer was to do with homilies: “please, have mercy on the faithful people of God,” people can’t stand long, tedious homilies that seem like conferences; people, the Pope recalled, want you “to speak to their heart and from the heart. One homiletics professor we had used to say to us: an idea, an image and a feeling. The only thing a homily must take into account is this: what do I want to get across? What image am I going to use to get the message across and what feeling am I going to transmit and provoke,” without falling into moralism?

“Do not scare away the faithful people of God, please,” Pope Francis stressed. “Don’t lose time! Talk about Jesus, about the joy of a faith that is rooted in Jesus, about the love which transforms love so that the enamoured heart bears witness to Jesus and his love, which is stronger than hatred and death. It is stronger than any form of murderous terrorism. We are lovingly called to be like Jesus, to love without limits, always. I must confess to you it brings me great sadness to see a parish priest who refuses to baptise a new-born baby because the mother is not married or the parents are remarried divorcees. He has no right to do this. You do not deny someone baptism: always remember that, don’t scare off the faithful.” Pope Francis beseeched priests: “There should be no Church without Jesus and without mercy!” Because when this happens, when a priest “acts like a bureaucrat and obeys the law by the letter, clinging to it, the Church, which is a mother, turns into a mother-in-law for many faithful. Please always make people feel that the Church is a mother!” 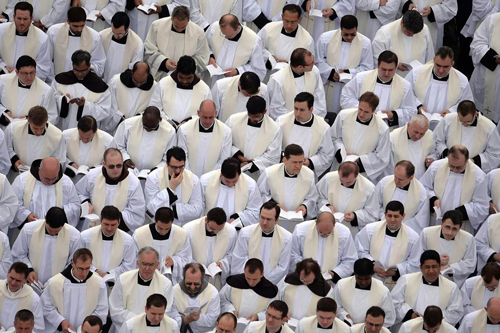 Regarding confessions and forgiveness, Pope Francis recalled the verses a parish priest in Buenos Aires dedicated to the Virgin Mary: “This evening, Our Lady, the promise is sincere but the truth, don’t forget to leave the key under the doormat”. The Pope said that when they enter the confessional, each penitent “must go in the knowledge that the key is under the door mat and that they can open the door again. Show mercy when you listen to confession. Love transforms and is contagious!” Before concluding, the Pope also talked about “the problem of divided Christians” in today’s world. He did so returning to an image he has used on a number of occasions before: that of the ecumenism of the blood and the temptation of clericalism: “clericalism is a dangerous temptation and its takes two to tango: priests like to clericalize and lay persons ask the priest to clericalize them because it is far easier.” Pope Francis urged priests to beware of clericalism.

Each of those present received a copy (in their own language) of the Apostolic Exhortation “Evangelii Gaudium” and of the Bull of Indiction of the Holy Year of Mercy. At the end of the Pope’s address, five priests from different parts of the world (Australia, Peru, the Netherlands, Burundi, Japan) asked a series of questions. Pope Francis addressed a number of issues in his answers, from secularisation to the working world of evangelisation (“never proselytise”) to the upcoming “green” encyclical (which contains two points about Patriarch Bartholomew I’s ecological commitment), the relationship between the European and Oriental Churches (“the relationship between the Catholic and Orthodox Churches is excellent”), poverty in Latin America and the “southern hemisphere” in general (“if we are not convinced that the poor are the Church’s treasure, then we will end up using them for propaganda. But without turning this into ideology”), the situation in Ukraine and the problems Africa is facing (Pope Francis said he will visit the continent in November this year: at least the Central African Republic, Uganda and possibly Kenya) and Asia’s enormous heritage: the testimony of its martyrs (“I see Asia as one of the Church’s greatest promises”).