An environment encyclical in March? Pope Francis hopes so

(CNA/EWTN News)  During an in-flight press conference on his way to the Philippines, Pope Francis said he plans to have his much-anticipated encyclical on man’s relationship with creation finished in March.

“At the end of March, I think it will be completed,” he told journalists aboard the papal plane Jan. 15. “I think that if the translations go well, in June or July, it could come out.”

A year ago this month, the Vatican had announced the Pope’s plans to write on the theme of “human ecology” – a phrase that was originally coined by retired pontiff Benedict XVI.

This expression, spokesman Father Federico Lombardi said at the time, describes not only how the faithful must respect the environment, but also how the nature of the person – masculine and feminine as created by God – must also be defended. 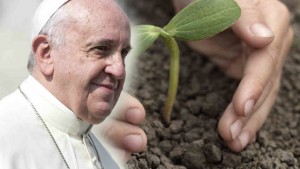 Pope Francis told journalists Thursday that the first draft of the encyclical was completed by Cardinal Peter Turkson of Ghana, head of the Pontifical Council for Justice and Peace.

“Then I worked on it,” the Pope said. “Then some theologians worked on the third version.”

The document was then reviewed by the Vatican Secretary of State as well as the Congregation for the Doctrine of the Faith. “Three weeks ago, I received the responses – some rather vague,” he added. “Now I’ll take a week out in March to look at it.”

Pope Francis’ first encyclical, entitled “Lumen Fidei,” or “Light of Faith,” was released in 2013. It was written by the pontiff as a completion of the work initiated by his predecessor, Benedict XVI, who resigned before the document was finished.

The Pope touched down in the Philippines Thursday where he will visit through Jan. 19, following his three-day visit to Sri Lanka. In stark contrast to Sri Lanka’s small Christian community, 86 percent of the Philippines’ 93.4 million people identify as Catholic. While the country has not known as much political unrest as Sri Lanka recently, the Philippines has been ravaged by several typhoons, earthquakes and other natural disasters in recent years.