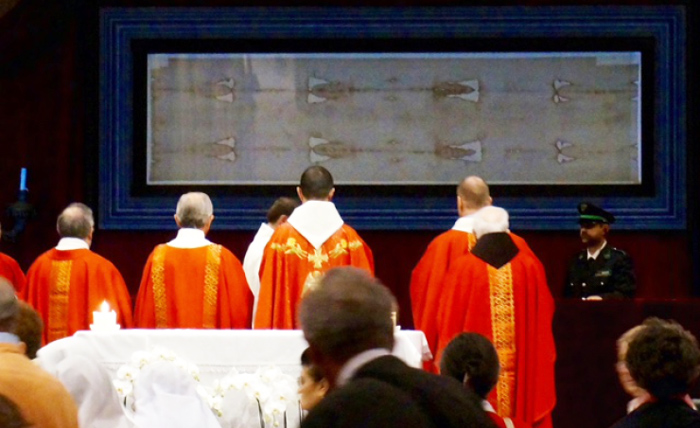 Most of the two million people who will see the Shroud of Turin this spring will wait sometimes hours just to stand for three minutes to pray before it; as we did yesterday. Few of the pilgrims know, as I found out on my last visit here in 2010, that anyone can come inside St. John the Baptist for the morning Mass at 7 a.m. each day. No ticket is necessary and there is no long line for Mass inside the Turin, Italy cathedral.

So this morning, on the feast of Fatima, and on my 59th and our son Jacob’s 25th birthdays (one of three Armstrong shared-birthdays), we were among the one hundred fifty or so people inside for the daily Mass in Italian. It was a profoundly moving experience for all of us as we started this special and final full day in Turin.

After Mass, we were allowed back to where we stood yesterday, a mere few feet from the Shroud, to pray before it for another three minutes. My lovely bride Patti commented as we left the Cathedral, “It is really amazing to think of all the people throughout the last two thousand years, starting with Mary Magdalene, and then the Apostles, who have seen the Shroud.”

In the afternoon we shopped for some Shroud holy cards, medals and artwork to bring back for some of our friends and family. There at the Apostolato Liturgico gift shop run by an order of nuns, we talked to Sister Chiara Noventa. With six of our kids present, she commented on what a large family we had brought to the Shroud. She was genuinely shocked when I told her four of our adult children were unable to make the trip. “I will pray for you and your beautiful family,” she promised.

Our next stop was to tour both way below and then way above the Cathedral of St. John the Baptist. Mass was first said here in the early fourth century. The original church was built upon the ruins of a Roman amphitheater, the stones of which were still visible in the basement of the cathedral. Next, it was time to climb to the very top of the church bell tower, which was constructed in the late fifteenth century. The views of the city of Turin from atop the bell tower were stunning. There are so many Catholic Church steeples that were visible along the Turin skyline that it was hard to count them all.

In fact, there are fifty-four Catholic churches inside the walls of the old city of Turin, most dating from the fifteenth to seventeenth centuries. You cannot walk more than a couple of blocks without finding a church. At one location at the Piazza San Carlo, there were two Churches across the street from one another. From the outside, St. Charles Borromeo and St. Cristina looked like nearly mirror images of one other. Inside all of Turin’s churches were large gold leaf-framed pieces of art, marble statues and columns, plus beautiful, elaborately-decorated tabernacles. Sadly, many of these churches no longer offer Masses because, while the population of Turin today is nearly one million—nearly ten times what it was in 1861 when it was Italy’s first capital city, few attend Mass or any services anymore. The same is true all over Italy and Europe.

After a double birthday dinner at the nearby steakhouse, “The Jumping Jester,” we walked to the riverfront and then enjoyed some gelato again. While there may not be crowds inside many of Turin’s churches these days, there were people aplenty watching television outside and inside of bars and restaurants showing a soccer match between Turin’s team, Juventus, against their archrivals Real Madrid. Car horns and cheers could be heard throughout the city until the early morning hours as they home team pulled out a 2-1 victory.

Tomorrow we leave for Milan on one of the fastest trains in Europe, The Frecciarossa. It reaches speeds of over two hundred twenty miles per hour. We will see the famous Milan Cathedral and we will attend the World Expo on Friday. More on that in our next and final report! Until then CIAO!

About the author: Mark Armstrong is married to Patti (the much more famous Catholic author). They have 10 children and two grandkids (so far). Mark travels and presents a PowerPoint presentation on “Our Lady of Guadalupe” to retreats, church events and conferences. He also spent 9 days in Italy in 2010, including three hours before the Shroud of Turin and has an amazing PowerPoint presentation on the Shroud of Turin, believed by many to be the actual burial cloth of Jesus Christ.

You can listen to “The Phil and Mark Show” every weekday morning from 5:30 to 9:00 a.m. on the legendary “Voice of the Northern Plains” KFYR Radio. Tune in thru I-Heart radio at http://www.kfyr.com/onair/pms-in-the-morning-51770/.