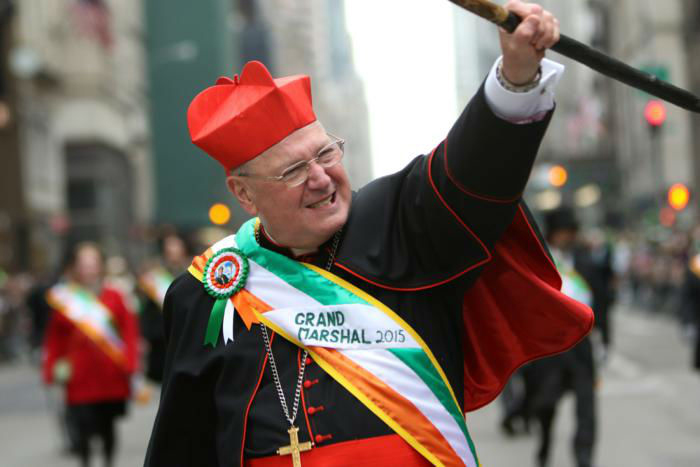 Cardinal Dolan leads 180 on pilgrimage from New York to Our Lady of Knock, Ireland

(Catholic Herald) Cardinal Timothy Dolan of New York has led 180 pilgrims from the US city to Ireland’s Knock Shrine.

The pilgrimage is the first from New York to the shrine in County Mayo, and the chartered flight is the first transatlantic service to the nearby airport in eight years.

Welcoming the cardinal and the pilgrims at the start of the eight-day visit on Sunday, Taoiseach Enda Kenny said: “There is no reason why Knock cannot take its place on the pedestal of the most important [pilgrimage] shrines of the world such as Lourdes and Fatima.” 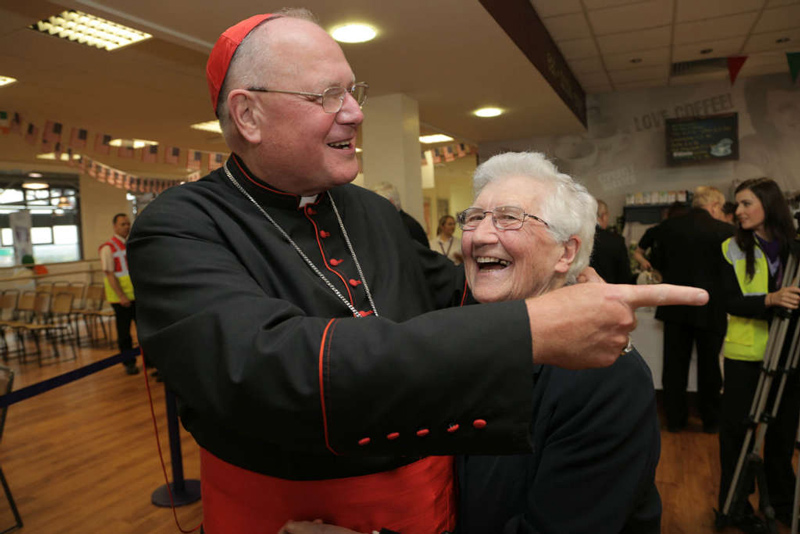 The shrine was established in 1879 after 15 villagers saw an apparition of the Blessed Virgin Mary, St Joseph and John the Evangelist,

According to the BBC, the pilgrimage was set up after a meeting two years ago between Cardinal Dolan, the archbishop of New York, and Knock’s parish priest, Fr Richard Gibbons.

“This is a very important and historic day for the promotion of Knock, Ireland’s national Marian shrine, at home and abroad,” Fr Gibbons said.

“It is hugely significant that the Archdiocese of New York, led by Cardinal Timothy Dolan, is deepening its relationship with Knock Shrine and highlighting the spiritual heritage of Irish Americans, especially in New York.” 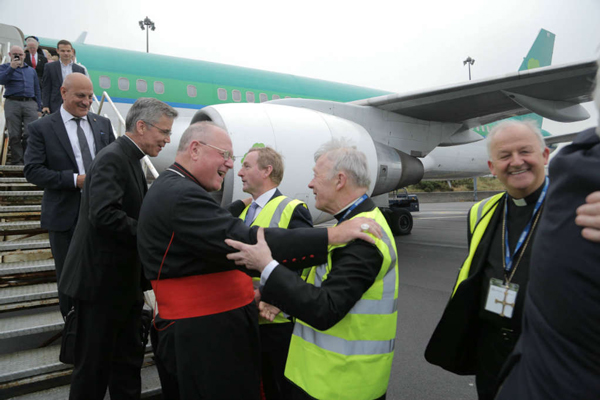 (Boyle Today) Knock Shrine and Ireland West Airport were delighted Sunday to welcome the arrival of the first Diocesan pilgrimage from the Archdiocese of New York with Aer Lingus.

The flight represents a historic development for the airport and the region, as this is the first ever transatlantic service operated by Aer Lingus, from the US to Ireland West Airport Knock and the first official chartered pilgrimage to Ireland’s National Marian Shrine.

The Aer Lingus 757 airplane, carrying over 170 passengers from a host of cities across the US, arrived into Ireland West Airport Knock ahead of schedule at 07:30am and was greeted by a huge crowd gathered at the airport to witness this historic occasion, including An Taoiseach, Enda Kenny and Stephen Kavanagh, CEO, of Aer Lingus.

The special pilgrimage flight, which is supported by the Archdiocese of New York and led by the Archbishop of New York, Timothy Michael Cardinal Dolan, will embark on an 8 day, specially tailored Pilgrimage programme, showcasing some of Ireland’s most historic spiritual sites, including a historic visit to Knock Shrine to open and participate in Ireland’s National Public Novena in honour of Our Lady of Knock.

Archbishop of New York, Timothy Michael Cardinal Dolan, speaking on landing in the West of Ireland said ‘It’s an honour for me to arrive into the beautiful West of Ireland on this historic flight. I am hugely excited to see what this beautiful part of Ireland has to offer and am particularly looking forward to opening Ireland’s National Public Novena on the 14th of August, with Mass in the Basilica of Our Lady, Queen of Ireland, in Knock’. 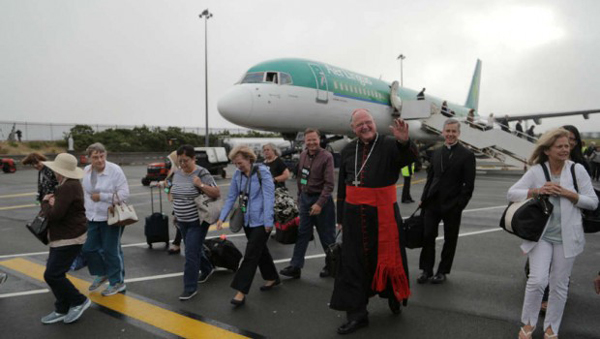 Fr. Richard Gibbons, P.P., and Rector of Knock Shrine commented, ‘This is a very important and historic day for the promotion of Knock, Ireland’s National Marian Shrine, at home and abroad. It is hugely significant that the Archdiocese of New York, led by Cardinal Timothy Dolan, is deepening its relationship with Knock Shrine and highlighting the spiritual heritage of Irish Americans especially in New York. Knock Shrine holds a special place in the hearts of our Diaspora, and in the Catholic tradition, pilgrimage plays a significant role in renewing people’s faith and we are delighted to facilitate that. It is also important to note that Ireland West Airport Knock was built specifically to welcome pilgrims to Knock Shrine as well as to develop the economic life of the West. Monsignor James Horan, I’m sure, would be very proud seeing his vision come to fruition’.

Welcoming today’s flight, Joe Kennedy, Chairman, Ireland West Airport Knock, said ‘I am honoured to welcome our visitors from the US on this historic occasion of the first ever Transatlantic service with Aer Lingus from New York, marking the return of transatlantic flights to the West of Ireland after an absence of 8 years. Its heartwarming to see people from a wide variety of cities such as New York, San Diego, Las Vegas, to name just a few, stepping off the plane at Ireland West this morning. It further reinforces our strong belief that direct scheduled services from the likes of New York and Boston into Ireland West would be successful. We hope our visitors have a great stay in Ireland and enjoy all the West and North West in particular have to offer’.

Declan Kearney, Director of Communications, Aer Lingus, welcoming today’s flight, added ‘Aer Lingus is delighted to have been chosen to provide the flights for this important pilgrimage group travelling from the Archdiocese of New York to Ireland West Airport Knock and Ireland’s National Marian Shrine’.