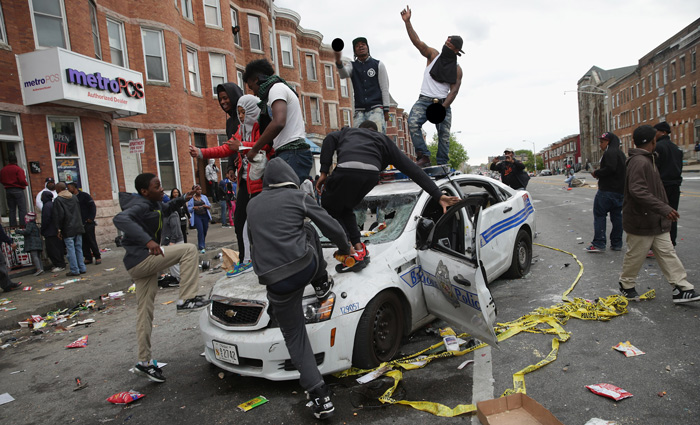 (CNA/EWTN News).- After both peaceful protests and violent riots following the death of an African American man in the custody of the Baltimore police, the local archbishop appealed to prayer and truth as means of healing and restoring human dignity.

“May we pray together that God will grace us with his presence always, so that our broken city can once again be made whole, and that our minds and our hearts will be open to peace and God’s love beyond all understanding,” Archbishop William E. Lori said in an April 28 video message.

“Today, many in our city are trying to come to grips with the aftermath of emotional and sometimes violent protests that threaten to overshadow two realities that cannot and should not be lost: a family’s devastating loss of a young man whose body was laid to rest Monday, and a grieving community’s peaceful quest for answers and for justice.”

Baltimore resident Freddie Gray, 25, died on April 19, one week after he sustained injuries while being transported following an arrest by Baltimore police. His injuries included a severed spinal cord and a crushed voicebox.

His funeral was on Monday.

“Our hearts cannot help but go out to the loved ones of Freddie Gray, whose pain and anguish we share,” Archbishop Lori said. “Freddie was not merely a symbol, but a real person whose life was tragically cut short.”

The archbishop said this pain will be endured by “far too many other Baltimore families” as long as “senseless violence and hatred continue.”

Hundreds of people have peacefully protested Gray’s death, and some protests have turned violent.

Many denounced the violence, including Gray’s family and President Barack Obama. Some residents worked to clean up after rioters.

Sean Caine, executive communications director of the Baltimore archdiocese, told CNA April 28 that the two bishops met with pastors, community members cleaning up after riots, and people who were at work.

Caine said the archbishop wanted to see the destruction and meet with people “to convey concern and offer support.”

Archbishop Lori said Gray’s death symbolizes the “rawest of open wounds” which can only be healed by the truth: the truth about what happened to Gray, the truth about “the sin of racism still present in our community” and the truth about the collective responsibility to deal with issues that undermine everyone’s human dignity.

Archbishop Lori called for prayer for the Gray family and for all families who have lost loved ones.

“May we unite in prayer for immediate and lasting healing, especially between members of our community and law enforcement, brought about by dialogue, mutual respect, understanding and love,” he continued.

He prayed that further protests will be peaceful, adding that violence “only deepens and prolongs injustice.”

The Archdiocese of Baltimore on its website listed opportunities to pray for peace at several Catholic churches, including a Tuesday evening Mass at the Cathedral of Mary Our Queen. St. Bernardine Catholic Church planned to host a previously scheduled youth revival on Tuesday evening in conjunction with St. Frances Academy, the oldest Catholic school for African-Americans in the U.S. An ecumenical prayer service was also scheduled at Broadneck Baptist Church.