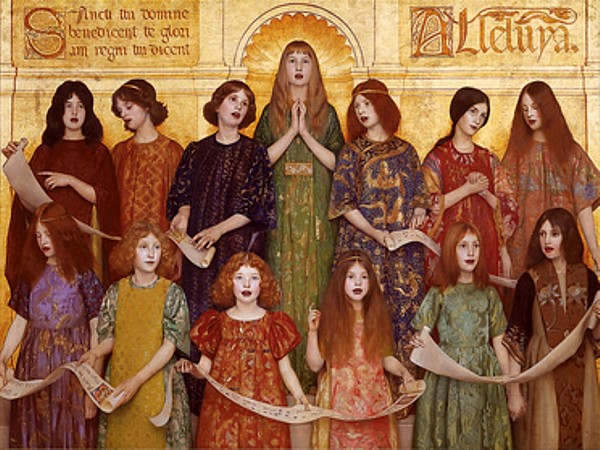 The penitential season of Lent officially begins on Ash Wednesday, which falls on March 1 this year. However, throughout the centuries, a pre-Lenten season has been celebrated in various cultures and with various traditions.

Since the Lenten fast used to be more severe (and still is for some traditions), and modern forms of food preservation did not exist, this period was a time to use up the foods that were forbidden during Lent. Thus, meals of meat and meat by-products, such as dairy and eggs, plus sugar and other treats were common at this time. In some places, celebrations sprang up around eating these times of food, celebrations that eventually expanded into the longer Carnival-type festivities.

In other places, these preparations took on a more subdued tone. In addition to the physical preparation for Lent (eating up all the fatty, sugary, meaty foods), there were spiritual disciplines added as well. Confession was celebrated more during this time, and liturgies also take on a more somber feel.

Today’s liturgies still take on these spiritual disciplines, discontinuing the singing of the “Gloria” and the “Alleluia” starting on Ash Wednesday. In past times, these omissions began during the period of Septuagesima. People familiar with the Extraordinary Form (commonly called Latin Mass) of the Roman Rite still celebrate this more formally, with their liturgies omitting the “alleluia” after the last Vespers before Septuagesima Sunday.

This tradition stems from a decree form Pope Alexander II, who put forth that a simple ceremony should mark the event of the last sung alleluia before Easter. Some faithful took it to the extreme – inserting as many alleluias as possible into the last day and final vespers before Septuagesima and literally “burying the Alleluia.” Worshippers would gather, chant Vespers, and then parade to an outdoor location where a banner with the word “Alleluia” would be buried, only retried after the joyous celebration of the Easter Vigil – when the Alleluia was once more proclaimed in the Mass.

Some communities and parishes still commemorate this liturgical season in this way:

The most common song sung at the end of Vespers and thus the last “alleluia” spoke before Easter was written in the 10th or 11th century and speaks of the glory of this word, the penitence of the Lenten season, and the forward-looking hope of singing it once again in celebration of the greatest event in the Church – the Resurrection of our Lord.

Alleluia, Song of Gladness
(Alleluia, dulce carmen)
Alleluia, song of gladness,
Voice of joy that cannot die;
Alleluia is the anthem
Ever raised by choirs on high;
In the house of God abiding
Thus they sing eternally.
Alleluia, thou resoundest,
True Jerusalem and free;
Alleluia, joyful mother,
All thy children sing with thee,
But by Babylon’s sad waters
Mourning exiles now are we.
Alleluia cannot always
Be our song while here below;
Alleluia, our transgressions
Make us for a while forego;
For the solemn time is coming
When our tears for sin must flow.
Therefore in our hymns we pray Thee,
Grant us, blessed Trinity,
At the last to keep Thine Easter
With Thy faithful saints on high;
There to Thee for ever singing
Alleluia joyfully.