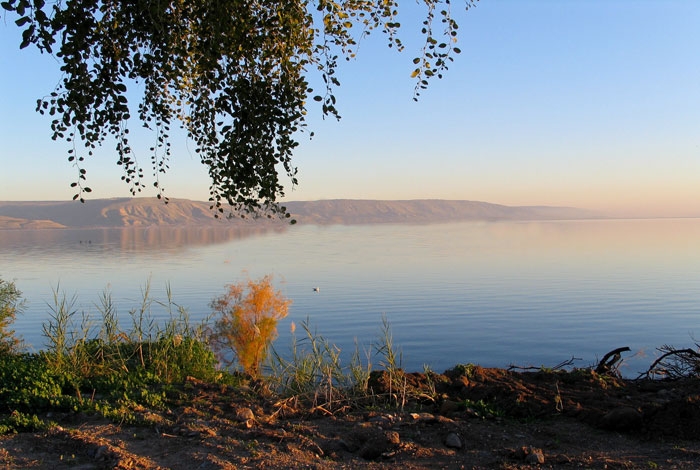 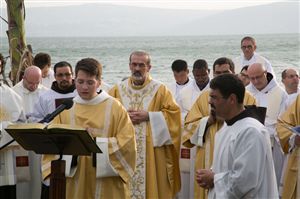 Fr. Pizzaballa, ofm, Custos of the Holy Land, stands behind a deacon proclaiming the Gospel on the shores that Jesus himself spoke the Gospel for the first time.

On Saturday October 11th, the Franciscans of the Holy Land made a pilgrimage to Capernaum on the shores of the Sea of Galilee. The site, famed for its mention in many episodes of the gospels, has allowed numbers of pilgrims to enjoy a time of reconciliation and prayer before celebrating a solemn mass not far from Peter’s house.

“Jesus entered a boat, made the crossing, and came into his own town [Capernaum]” (Mt 9:1). The town of Capernaum is mentioned again and again in the gospels as the premier site of the Messiah’s teachings.

That is the meaning of the pilgrimage organized by the Friars Minor on Saturday, October 11th: to keep alive the memory of the Savior who performed many miracles here (the healing of the demon-possessed, the healing of Peter’s mother-in-law, the multiplication of the bread, the calming of the storm…) and gave a large part of his teachings here (the bread of life discourse, the calling of the disciples, the primacy of Peter, etc.).

After taking time for confession and personal prayer on the shores of the Sea of Galilee, the pilgrims gathered for mass, with the Custos of the Holy Land as principal concelebrant among many other priests. Clergy and congregants moved in procession around the church to the accompanied of hymns sung by the Custody choir. Mass then continued in Arabic, in the open air at lakeside.

The homily was delivered in Arabic by the pastor of the Nazareth parish, Fr. Amjad Sabbara, who drew connections between the current situation in the Middle East and various gospel episodes taught at Capernaum. “As Jesus is in the boat of our lives, we just have to awaken him. That is, we must believe in him when we are tired, when we are in difficulty. At this time when we think that evil is stronger than good, we need the strength of the Eucharist,” the preacher recalled. “With our own strength we can do nothing. But with the strength of God everything is possible.” After the solemn benediction, Father Pizzaballa performed the traditional rite of blessing of the harvest before distributing the products of the harvest to the faithful.

As for the congregation, a Franciscan father explained that “the pilgrims come from different cities”. “Buses come from Jerusalem, Bethlehem, Nazareth and several towns in the Galilee.” Even so, this pilgrimage is of recent origin, barely more than four years old. The site was added to the list of “Franciscan stations” following construction of the new church.

Although a Byzantine basilica was built there around the fifth century on the shores of the Sea of Galilee, the site was long without any significant Christian presence. The Custody of the Holy Land bought the site toward the end of the 19th century, when the ruins of the synagogue where Christ had taught were discovered. Large archaeological digs were organized during the 1960’s in the course of which the Francisca Fr. Virgilio Corbo discovered Simon-Peter’s house. The new church was built over these ruins. The site, adjacent to the Sea of Galilee, is just a few kilometers from the Mount of Beatitudes, where Christ delivered the Sermon on the Mount.

This is, therefore, a particularly important pilgrimage destination. The beautiful setting makes it easy to imagine Christ’s teachings. And is difficult not to be struck by the mystery that surrounds the celebration of the Eucharist on the very site where the Messiah said, “I am the Bread of Life, whoever comes to me will never die; whoever eats my flesh and drinks my blood will have eternal life” (Jn 6:16-71).

Faithful to Franciscan tradition, the friars and pilgrims ended the day by sharing a fraternal meal at lakeside. One Franciscan said with good humor, “We are here where Jesus fed the crowds. So of course after the Eucharistic meal we share our daily bread.”