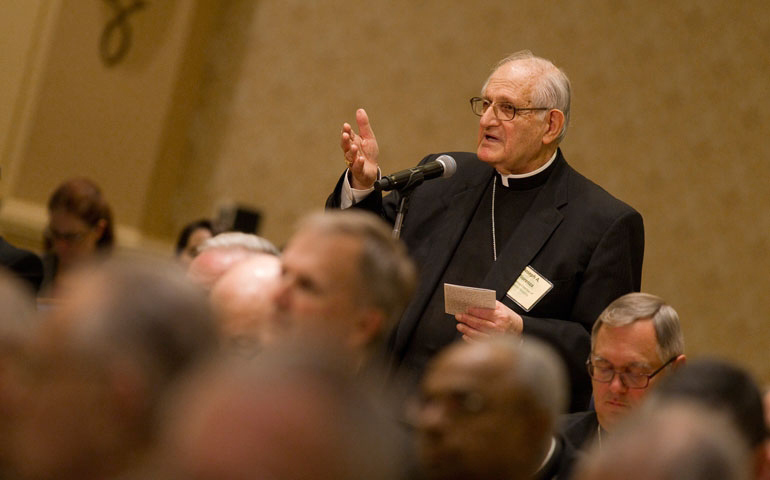 The U.S. Conference of Catholic Bishops (USCCB) will meet in Baltimore, November 10-13, for their annual Fall General Assembly. The bishops will hear the first presidential address of Archbishop Joseph E. Kurtz of Louisville, Kentucky, president of USCCB, who was elected to a three-year term in November 2013. Archbishop Carlo Maria Viganò, apostolic nuncio to the United States, will also address the bishops.

The afternoon of Monday, November 10, the bishops will concelebrate Mass at the Basilica of the Assumption of the Blessed Virgin Mary in honor of the 225th anniversary of the establishment of the Archdiocese of Baltimore. Baltimore is the “premier see” or first diocese founded in the United States.

The bishops will vote for the USCCB secretary-elect, the chairmen-elect of five USCCB committees and board members of Catholic Relief Services (CRS) and the Catholic Legal Immigration Network, Inc. (CLINIC). They will also vote on the 2015 Conference budget, the 2016 diocesan assessment, liturgical action items including a proposal to revise “Guidelines for the Celebration of the Sacraments with Persons with Disabilities,” and a proposal to proceed on a revision to the “Ethical and Religious Directives for Catholic Health Care Services.”

Archbishop Paul S. Coakley of Oklahoma City, chairman of the CRS board, will present with Carolyn Woo, president of CRS, on CRS’ work on capacity building. Bishop Richard E. Pates of Des Moines, Iowa, chairman of the Committee on International Justice and Peace, will present on the recent pilgrimage of prayer for peace in the Holy Land. Cardinal Theodore E. McCarrick, archbishop emeritus of Washington, will present on USCCB engagement with the Church in Africa. Bishop Richard J. Malone of Buffalo, New York, chairman of the Committee on Laity, Marriage, Family Life and Youth, will invite the bishops to the Lay Ecclesial Ministry Summit. The bishops will also conduct the canonical consultation on the sainthood cause of Father Paul Wattson.

Other presentations at the meeting will include Archbishop J. Peter Sartain of Seattle, secretary of USCCB, on the status of the 2013-2016 Conference Strategic Plan, “The New Evangelization: Faith, Worship, Witness,” Archbishop Salvatore J. Cordileone of San Francisco on the work of the Subcommittee for the Promotion and Defense of Marriage, Archbishop William E. Lori of Baltimore on the work of the Ad Hoc Committee for Religious Liberty and an update by the working group on the life and dignity of the human person.