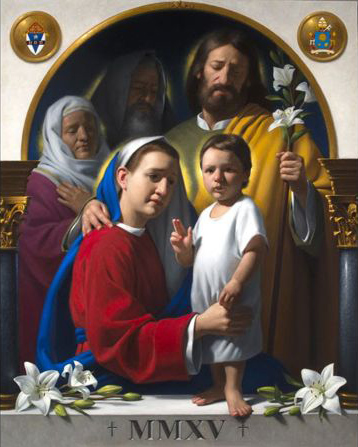 (CNA/EWTN News).- The official prayer and image for the World Meeting of Families in Philadelphia next year have been released to aid pilgrims in spiritual preparation for the upcoming event.

“The prayer and iconic image will inspire everyone as we continue to prepare for the 2015 World Meeting of Families,” said Archbishop Charles J. Chaput of Philadelphia as he unveiled the prayer and image at a Sept. 7 Mass.

“With their focus on enriching and reenergizing the spiritual life of families – both Catholic and non-Catholic alike, I’m hopeful that this prayer and image can help all of us to examine our minds and hearts and deepen our relationships with God and our families in meaningful ways.”

The prayer is available in 18 languages, including American Sign Language, and is intended to encourage family unity and intercession for the meeting, which has as its theme, “Love is our mission: the family fully alive.”

It begins by recognizing all people as children of God and asks for his love to help families worldwide and then for the intercession of the Holy Family in guiding families to seek truth and to live in God’s love.

The Archdiocese of Philadelphia said that the prayer “is meant to serve as a vehicle of hope and faith for families. Encouraging daily recitation for the success of the event and for personal intentions, the prayer is foundational to both the conference’s theme and its planned content.”

The iconic image, commissioned by the archdiocese and painted by local artist Neilson Carlin, features the Holy Family standing with the Christ Child and Mary’s parents, Sts. Joachim and Ann. The original oil painting measuring four-by-five feet will be on display in the Cathedral Basilica of Sts. Peter and Paul through the end of next year’s World Meeting of Families.

“I am both honored and humbled by the opportunity…