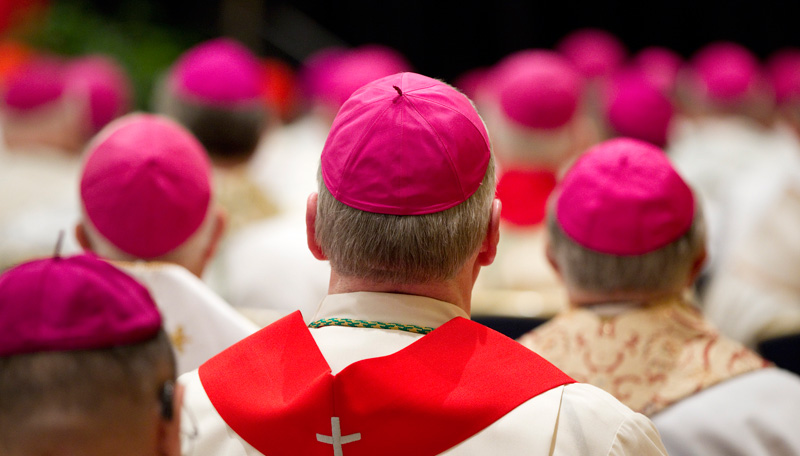 Liturgical matters will take center stage on the agenda of action items at the fall general meeting of the U.S. Conference of Catholic Bishops, to be held Nov. 10-13 in Baltimore. [Baltimore Marriott Waterfront]

There will be five liturgical items up for consideration. All are subject to amendments from bishops. All but one require approval of two-thirds of the bishops, followed by final approval from the Vatican.

Archbishop Joseph E. Kurtz of Louisville, Kentucky, who is president of the USCCB, will deliver his first presidential address. He was elected to a three-year term last November. As is customary, Archbishop Carlo Maria Vigano, apostolic nuncio to the United States, also will address the assembly. 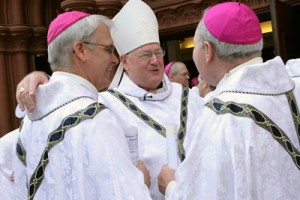 During the meeting, the bishops will choose a new secretary-elect for the USCCB, and vote for the chairmen-elect of five committees.  A number of presentations will be made, including one on underserved communities and Catholic schools, and another on a recent pilgrimage of prayer for peace in the Holy Land.

The bishops also will conduct the canonical consultation on the sainthood cause of Father Paul Wattson. Father Wattson was an Episcopal priest who co-founded the Society of the Atonement, also known as the Franciscan Friars and Sisters of the Atonement, to further Christian unity. He was received into the Catholic Church as were all men and women in the society at the time, and devised the Week of Prayer for Christian Unity, still observed each January.

On the first day of the meeting, the bishops will concelebrate Mass at the Basilica of the Assumption of the Blessed Virgin Mary in Baltimore in honor of the 225th anniversary of the establishment of the Archdiocese of Baltimore. Baltimore was the first diocese founded in the United States. The bishops had similarly marked the bicentennial of the U.S. hierarchy in 1989 with a Mass at the basilica.

The liturgical items up for consideration:

— A revised translation of the ritual book “Dedication of a Church and Altar,” used whenever a new church is built or when a new altar is made. The revised English translation incorporates the modifications from the Code of Canon Law as well as bringing the translation into conformity with the Roman Missal, Third Edition.

— A first-ever official English translation of the ritual book “Exorcisms and Related Supplications,” revised after the Second Vatican Council, and promulgated in Latin in 1999 with an amended version in 2004. The main part of this book is the rite of major exorcism and includes an introduction outlining criteria for its use, which is always the decision of the bishop alone. While this text affirms the reality of evil in the world, it even more so affirms the sovereignty of Jesus to overcome any and all evil.

— A supplement to the Liturgy of the Hours of an English translation of the prayers used for the feast days of saints who have been added to the general calendar since 1984.

— Modifications to the Revised Grail Psalms, originally approved in 2010 by the Vatican. The USCCB Committee on Divine Worship recommended improving the translation and its “sprung rhythm” to make proclamation and singing easier.

The fifth liturgy-related item would authorize rewriting for later approval guidelines from its 1995 document “Guidelines for the Celebration of the Sacraments with Persons with Disabilities” in light of medical developments and increased awareness of challenges faced by Catholics today, such as gluten intolerance, also known as celiac disease.

Other action items to be addressed by the bishops include the 2015 USCCB budget, the 2016 diocesan assessment, and a proposal to proceed on a revision to the “Ethical and Religious Directives for Catholic Health Care Services.” 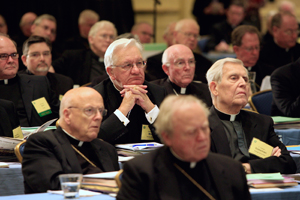 In USCCB elections, Archbishops Gregory M. Aymond of New Orleans and Timothy P. Broglio of the Archdiocese for the Military Services have been nominated as secretary-elect. The five committees seeking chairmen-elect, and their bishop-nominees, are:

The secretary-elect and the chairmen-elect will serve one year in that capacity and then begin a three-year term.

The bishops also will vote on members for the board of the Catholic Legal Immigration Network and Catholic Relief Services, the USCCB’s international aid and development agency, as well as hear a presentation by Archbishop Paul S. Coakley of Oklahoma City, chairman of the CRS board, and CRS president Carolyn Woo on CRS’ work on capacity building.

Other presentations scheduled for the USCCB meeting:

— The pilgrimage of prayer for peace in the Holy Land, presented by Bishop Richard E. Pates of Des Moines, Iowa, chairman of the Committee on International Justice and Peace.

— The observance of the Year of Consecrated Life and the “Guidelines for the Reception of Ministers in the United States, Third Edition” and plans for their implementation, presented by Bishop Michael F. Burbidge of Raleigh, North Carolina, chairman of the Committee on Clergy, Consecrated Life and Vocations.