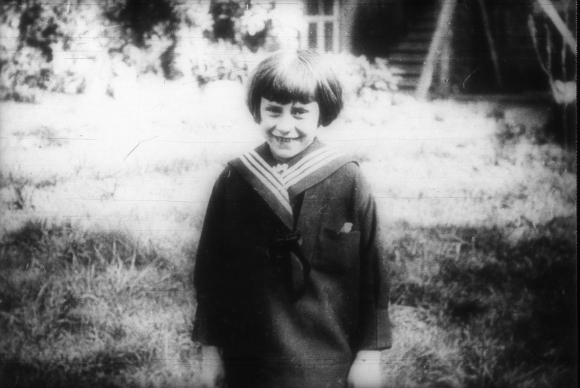 Banneux is a small town in Belgium, so small that it is not even on the map. During the time of Hitler’s rise to power, an 11-year-old girl named Mariette Beco was experiencing something that made no news.

Mariette was born March 25, 1921, the Feast of the Annunciation, the oldest of seven children. As her family rarely attended Mass, neither did Mariette, whose life was minus any religious example whatsoever. Her Catholic father had not been near a church in years and did not care whether his children went to church or not.

Nevertheless, Mariette did keep a rosary she had found and, on occasion, held it as she prayed while going to sleep.

On January 15, 1933, Mariette was looking out the kitchen window hoping to see her brother Julien coming home. It was cold outside and snow was on the ground. Wind, forcing its way through the cracks in the wooden siding, made whistling noises, creating a symphony of eerie sounds.

As Mariette stared out the window into the blackness of the night, she saw a Lady standing in the yard. The Lady was surrounded by a bright light and was very beautiful. She had on a long white gown with a blue sash and was barefoot. There was a gold rose between the toes of her feet. Mariette noticed how the Lady was not standing directly on the ground but, rather, somewhat above it. The Lady used her hand and motioned Mariette to come to her.

Mariette rationalized that what she was seeing did not make any sense. She thought it might be a reflection in an oil lamp. So she moved the lamp into another room. When she went back to the window the Lady was still there. She called her mom and told her what she was seeing. Her mother shook her head and said, “Rubbish.”

Mariette insisted that there was a Lady outside and her mother mocked her, “Perhaps it is the Blessed Virgin.” Then she shrugged, pulled the curtain closed and walked away.

Mariette pulled the curtain open and said, “Look, Mama. She’s beautiful. She’s smiling at me. I want to go outside.”

“You are not going anywhere, Mariette. Now stop this nonsense and lock that door.”

Three days later on January 18, Mariette suddenly ran from the house. It was about 7 p.m. and her father ran after her. The girl ran around the yard and suddenly fell to her knees. The Lady was now facing her from about a yard away. Her father, watching from behind a tree, was mesmerized by the scene.

The Lady signaled Mariette to follow her and she got off her knees and did. Her father followed and Mariette suddenly stopped and fell to her knees again. She was next to a spring and she heard, “Put your hands in the water! This fountain is reserved for me. Goodnight. Good-bye.”

The Lady faded away. Amazingly, Mariette’s father, who never saw the Lady, was transformed and went to Father Jamin for general confession so he could go back to Mass and Communion.

The Blessed Virgin appeared eight times to Mariette, the last one being on March 2, 1933. During these apparitions Mariette was told by the Lady “I am the Virgin of the Poor and the fountain is reserved for all nations to bring comfort to the sick.”

Our Blessed Mother also asked for a small chapel to be built and told Mariette that She had come to alleviate sufferings. She asked several times for many prayers, and during the final apparition on March 2, 1933, told Mariette, “I am the Mother of the Savior, the Mother of God. Pray very much.”

The Blessed Mother placed her hands on Mariette’s head and said, “Adieu. Till we meet in God.”

In 1942 the Bishop of Liege, Belgium, approved veneration of Mary under the title of Our Lady of the Poor. In 1947, approval for the apparitions came from the Holy See and in 1949, under Pope Pius XII, it was declared “definite.”

Interestingly, Mariette Beco led a relatively normal, secular life with its share of “ups and downs.” She married a restaurant owner, had marital problems which caused her great turmoil, then lived with a handicapped person whom she cared for until his death. Unlike a “typical” seer (if there is such a thing) she practiced religion very little and would not talk to reporters and those wanting information about her life. In 2008, asked for a statement on the 75th anniversary of the apparitions, Beco explained why she would say nothing, “I was no more than a postman who delivers the mail. Once this has been done, the postman is of no importance, anymore.”

She lived to be 90 years old and, unlike Bernadette of Lourdes or the children at Fatima, or St. Catherine Laboure and others like them, there never seemed to be anything distinctly religious about her.

What we think matters not. God bestows his graces where he will, knowing the state of any soul better than any could guess.

Our Lady of Banneux, Our Lady of the Poor, appeared to Mariette eight different times and entrusted her with Her message. Holy Mother Church has confirmed this. Mariette Beco was definitely unique and very special in the eyes of God and His Mother.

That is all we need to know.