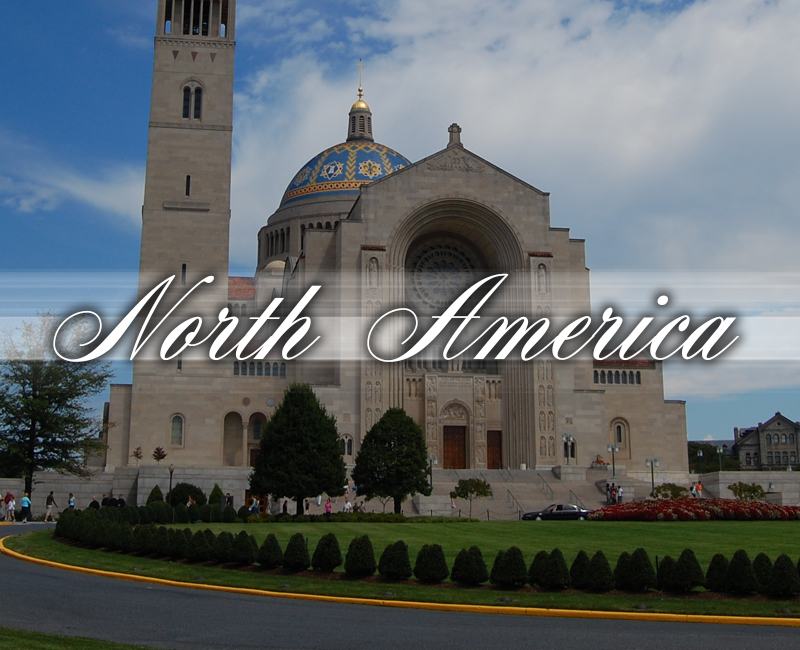 (Busted Halo) We’ve picked out our top 10 Catholic sites to visit (nine in the United States and one in Canada). Add the one closest to your vacation destination into your itinerary, or, if you live nearby, just plan a day trip, or a long weekend. These places offer breathtaking art and architecture, and inspirational histories, along with their obvious holiness. They are great places to bring the family or to take a solo pilgrimage.

West
Shrine of Saint Therese (Juneau, Alaska)
In these modern times, when our lives are constantly enveloped by traffic and technology, there are few places for us to find peace and tranquility. Amid the pristine Alaskan landscape, you can find one of these refuges, surrounded by nothing but natural beauty. The Shrine of St. Therese is recognized as a place of “special beauty.” Retreat opportunities are available for individuals, families and groups of any size. There are masses offered regularly; also a lovely garden trail, Stations of the Cross, and more. And the shrine’s location on the ocean provides a great opportunity for whale watching, if you come at the right time.

Our Lady of the Rockies (Butte, Montana)
Most people have heard of Christ the Redeemer in Brazil, but did you know that the Holy Mother has a giant statue, too? Made entirely through generous donations and volunteer effort, the project was thought up by a man named Bob O’Bill, who promised to make a 9-foot statue of the Blessed Virgin in his backyard if his wife recovered from cancer. Obviously, she did recover and the statue became a reality — a reality much bigger than Bob’s backyard! Bus tours take place twice a day over the summer, and visitors can actually go inside the 90-foot statue. Though it resembles Mary, the statue is actually nondenominational, and is dedicated to women — especially mothers — everywhere. There is a chapel at the statue’s base, with a memorial wall to women covered with thousands of plaques.

Southwest
Monastery of Christ in the Desert (Abiquiu, New Mexico)
Tucked into the beautiful wilderness of northwestern New Mexico, this monastery was founded in 1964. Here, you can get a glimpse into the tradition of Saint Benedict, full of work and prayer. You are welcome to visit for the day, meditate or attend the services. Rooms are also available for guests who wish to go on a personal retreat. Everyone is encouraged to join in, not only in the prayers of the monks, but also in the daily work to be done around the community. Experienced hikers will enjoy the trails and scenery.

Midwest
National Shrine of Our Lady of the Snows (Belleville, Illinois)
With more than 200 acres of land, Our Lady of the Snows is one of the country’s largest outdoor shrines. It is dedicated to the Church of Saint Mary Major in Rome, which is also known as Our Lady of the Snows. This title has direct ties to the legend about a miraculous snowfall in Rome in 352 A.D. In a dream, Mary directed a wealthy Roman couple to build a church for her on a certain site. This site would be marked by a blanket of snow. There was just one problem — it was the middle of the summer! Nevertheless, on the blazing hot morning of August 5, Esquiline Hill was covered with snow. All Rome proclaimed it a miracle, and a church to honor Mary was built there in 358 A.D. The Shrine is open daily and offers a variety of religious activities for Catholics and non-Catholics alike.

Father Solanus Casey Center (Detroit, Michigan)
The life of Father Solanus Casey is a fine example of God’s mysterious workings. Born in 1870 to a family of Irish immigrants, he entered seminary at 21. Though he didn’t do well in his classes, he was ordained in 1904, but in a capacity that didn’t allow him to hear confessions or to preach doctrinal sermons. He served for 20 years in New York, Harlem and Yonkers, before being transferred to Saint Bonaventure Monastery in Detroit. Though seemingly a less-than-glamorous career, Father Solanus’ life became a great blessing to those he met. In Detroit, he took on the role of porter and encountered thousands of people, from all walks of life, who he was always willing to listen to. This soon earned him the nickname “The Doorkeeper.” When he died in 1957, the other priests were astonished when more than 20,000 people filed past his casket. Later, his body was disinterred when being transferred, and was found to be incorrupt. The Solanus Casey Center remains a place of pilgrimage, reconciliation and peace.

South
Ave Maria Grotto (Cullman, Alabama)
Constructed from 1934 to 1958 by Brother Joseph Zoettl, a Benedictine monk from Landshut, Bavaria, this four-acre park is often called “Jerusalem in Miniature.” It contains 125 amazing reproductions of some of the world’s most famous shrines and holy sites, all built by Brother Joseph himself. In starting construction, Brother Joseph’s main dilemma was figuring out what to use as material. God soon gave him an answer, when a train derailment caused a freight car to overturn, crushing its load of marble. Now useless to the shipper, the marble was given to Brother Joseph’s monastery, and become the main building material for his grotto. The Grotto is open daily, and the Monastery nearby even has a retreat center and rooms for overnight guests.

Saint Louis Cathedral (New Orleans, Louisana)
Built in 1737, this church was the first in the area. It was dedicated to King Louis IX, who would later become Saint Louis. With its diligent caretakers and ongoing restoration, it remains the oldest Catholic cathedral in continual use in the United States. A great fire in 1788 burnt the original Saint Louis Cathedral to the ground, but the remains were soon cleared away in order to make room for reconstruction. The new church was completed in December 1794. Twelve bishops and archbishops are interred around the altar, and a number of the city’s early leaders have been buried under the church.

Northeast
National Shrine of Saint Kateri Tekakwitha (Fonda, New York)
Kateri Tekakwitha was born the daughter of a Mohawk Indian chief in 1656. When she was 4, her parents and brother died from a smallpox epidemic. Though she contracted the disease, she survived, though with horrible scars that ruined her vision. Yet, even with this and other awful things brought to the mainland by the new settlers, Kateri wished to join the Christian faith. So, on Christmas Day in 1677, she received her first Holy Communion. After this, she continually was mocked and threatened by her fellow villagers, eventually resulting in her fleeing to the Mission of Saint Francis Xavier in Canada. There, she devoted herself to caring for the sick, teaching children, and praying. She died at the age of 24, leaving behind a great legacy of kindness and mercy. People who have prayed for her intercession have reported many healings as a result. The Shrine is open daily, with Mass offered on the weekends.

St. Malachy’s — “The Actors’ Chapel” (New York City)
If you happen to be near Times Square in New York City, stop into this interesting little landmark. Though it was founded as a traditional parish in 1902, by 1920, the area’s evolving nature had earned the church its nickname: “The Actors’ Chapel.” Here, times for confession, Mass and other services run not by a typical parish’s timetable, but by the schedules of those in the theatre business. Mass is offered daily, with a choir of volunteer singers.

Passport Required!
Saint Anne de Beaupre Shrine (Quebec City, Canada)
Sainte Anne de Beaupre Shrine is the oldest pilgrimage site in Canada. Its dedication refers to St. Anne, the mother of Mary. Inside the basilica, there is a wall of crutches, representing the numerous healings attributed to the intercession of St. Anne. The shrine also features the renowned Scala Sancta chapel. In the basement, there is a replica of Michelangelo’s Pieta and a small Blessed Sacrament. Masses and other services are offered daily, as well as special services and accommodations for pilgrims.

For more information about the pilgrimages Tekton Ministries offers, visit our website!